Today being a public holiday (Assumption), it felt like a Sunday - what better day to take advantage of waking early to get to the Sainte Chapelle for opening time. Even so, a good 60 or 70 people had had the same idea, so it quickly seemed crowded; heaven knows what it's like later in the day. 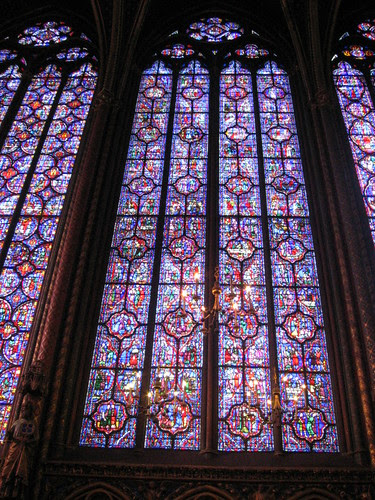 You'd need binoculars to examine more than the lowest portions of these glorious windows, which depict the main outlines of the stories in the Bible. The power of the place is in the overall - and overwhelming - flood of light and colour.

I'd investigated the concerts here that I'd heard about, but the programmes seemed to focus on some familiar old warhorses, and you pay (€25) for the venue rather than the music - and for the fact that you couldn't fit much of an audience in. By the time you'd put together the forces for the sort of music it calls for (Tallis's Spem in Alium? The Monteverdi Vespers? Bach cantatas and masses?) there might not be room for an audience at all.

The early clouds had cleared for another sunny day - so what better than a gentle bike ride towards the Canal St Martin, via the Bassin de l'Arsenal (complete with a chainsaw sculptor), a street market on the Boulevard Voltaire, and a glimpse of a stylish attempt to make the best of sleeping out: two ornate armchairs arranged together under the railway arches as formally as in any Seizième salon. Homeless people sleeping rough seem to be much more visible than in London: but maybe that's something to do with where I go (or don't go) in London. 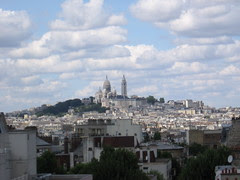 Another walk from Paris Inconnu: first around the villagey Butte Bergeyre with its view of Sacré-Coeur and its vineyard (my first school exchange visit to Paris was to a house in this very street, but none of it seemed at all familiar now), then through the Parc des Buttes Chaumont to Belleville. Passing an interesting invitation to challenge a cook and the artists' squat at La Forge ("God loves graffiti", apparently), the walk arrives at Boulevard de Belleville.

The huge Friday market seemed to be shutting up shop. But in one of the side streets, there was a large group of people collected together, mostly from West rather than North Africa I would guess, dressed in - well, their Friday rather than Sunday best, since they were clearly Moslems coming out of Friday prayers: robes in white, reds, blues and greens. If Sunday is the wrong word, the phrase "go-to-meeting hat" still seemed appropriate - men wore caps that were knitted, beaded, crocheted or embroidered, or in some cases tasselled, and women had flowery or sequined head scarves. In London terms, the scene was a meeting of Brixton, Whitechapel and Stoke Newington. 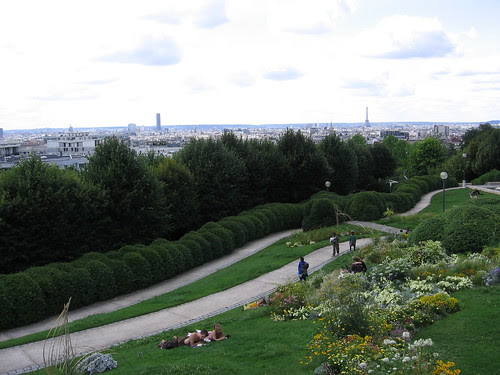 The walk moved on uphill, through the Parc de Belleville. Beyond the rather wonky water feature, the Maison de l'Air with a fine panorama of Paris, where suddenly all the people seemed to be white - perhaps they had come down from the rather posher streets at the top of the hill.

On the way back, there was a different sort of market further along the Boulevard: people selling whatever they could from a cloth on the ground. It would be stretching a point to call it bric-à-brac; and they weren't helped by the detritus of the earlier market and its crowds. The "exotic" and "colourful" sometimes come at a price we spectators don't pay.
Posted by Autolycus at 20:06