There's something I have in mind to do at the Arc de Triomphe (nothing too intriguing); but finding this morning that it's open until late in the evening allowed me to put it off (it seemed just as busy at 6pm, so maybe that idea needs parking for a bit longer).

Instead, since I was that side of the city, I decided to follow the walking route on Paris Inconnu around Batignolles, a part of Paris I didn't know. Best way to get there? A bike, of course - much more direct than taking the Metro, and it's possible to stop off wherever takes your fancy. In this case, it was a coffee-break at the Parc Monceau.

My, how things have changed over the years, at least from my earliest perceptions of Paris parks. It is beautifully looked after, you can sit on the grass and there's an advertised Wi-fi zone so people could work there if they wanted. The park has a statues to several literary personages. I know this one is of Pailleron, a 19th-century playwright and poet, but to me its story is either "But, Daddy, I really really NEED those shoes", or "Did I leave the gas on?"

Batignolles also has a very pretty park (with an elaborate greenhouse containing one solitary citrus tree). Around it there is almost a village or small-town feel, a pleasant street market on rue de Lévis and plenty of small businesses. In one street I passed a workshop where a young woman was painstakingly cleaning a religious painting: there seems to have been a fairly long connection with art and artists. A lot of the housing seems middle to upmarket, and those streets that aren't are showing signs of gentrification. An antique shop was offering reductions to clear the stock before the summer holidays - but with the marked price on a pair of chipped enamel wash-stands at €195, you might wonder what prospects there are for a re-opening.

After lunch, another bike-ride (downhill all the way!) to the Musée de l'Art Moderne at the Palais de Tokyo for the Bridget Riley retrospective; apparently she doesn't like being identified solely with 60s "Op Art", and considers herself to have started from post-Impressionist experiments with colour perception. It is extraordinary how some of the paintings seem to ripple and revolve - the eyes need quite a rest after looking at each one. Her sketches and work notes show how much complex work goes into planning the effects. 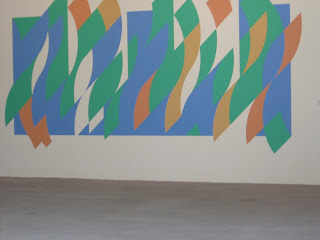 The more recent colour paintings I don't find quite so interesting, but this most recent picture reminds me a lot of Matisse. There's a final curving wall of overlapping circles in black on white than can keep you occupied for quite a while.

They also had an exhibition of an Anglo-Canadian painter, Peter Doig, which has transferred from the Tate in London: there's something slightly unsettling about his pictures (vast landscapes with a lonely figure or two), an atmosphere part Edward Hopper, part Sidney Nolan. There was a separate room of Christian Boltanski: a truly creepy "Reserves of the museum of childhood" (ceiling-high racks of discarded children's clothing - now what does that remind you of?) and "All the telephone subscribers" (a collection of worldwide telephone directories - and, yes, the temptation was irresistible, I am there, I do exist).

By chance, I ended up travelling (metaphorically speaking) thousands of miles and hundreds of years: across the street is the Musée Guimet, of Asiatic art. This was a real eye-opener: full of interesting and beautiful things from Cambodia and other South-East Asian countries as well as India, China (screens, lots of ceramics and some vigorous horse scultures), Japan (the library area in the building's impressive rotunda has some ethereal flower-paintings), Korea - and Tibet, Nepal and Afghanistan. There's a strong, but not exclusive, focus on the shared Hindu/Buddhist heritage; there's a limit to the number of representations of the Buddha I can take before they all get confused (interesting, but not surprising, how some from Afghanistan looked almost Hellenic), and much of the Indian and Chinese material is similar to many other holdings, but they're still beautiful.

This was an unexpected bonus to the day. Vaut le détour.
Posted by Autolycus at 19:44