It's not often one gets to drink a coffee with 1000 tons of ship hanging overhead, but now you can (at a price). The Cutty Sark has been reopened, and I managed to get in with the first group of visitors this morning.

The ship has been raised several metres to rest on a secure steel framework rather than its own keel (which was deforming its shape and threatening eventual collapse of the hull), and the wear and tear of decades (not to mention the damage from the fire during restoration work) has been repaired and refurbished with a degree of care and resort to traditional materials and craftsmanship that borders on the obsessive.

You enter through the lower hold, with the bones of the ship on full display, along with plenty of information about the tea trade (including a special space for the tiniest children).

Then it's up to the tween-deck, a broad open space for cargo (and for the captain to practise his cycling and roller-skating), with most of the crew squeezed into quarters in the bows. Here the focus of the displays shifts to the wool trade and to the experience of working on the ship: there's a chance to practise your skill at steering to catch the fastest wind, and to sit on a seat that rolls while you watch old film of sailing ships in the roughest of seas.

Onward and upward to the top deck, with the officers' quarters, the galley (and pens for pigs and chickens, complete with sound effects), and the masts and rigging towering above. Then you "go ashore" into a staircase and lift block, to take you down to the dry dock itself, and the most dramatic element:

coming out from an anonymous corridor to find the shining brass cladding of the hull and keel lowering above the open space (which will of course be let out for lucrative private shindigs).

Here there is a small cafe, and a striking collection of ships figureheads,

dominated by Nannie, the Cutty Sark herself, clutching the tail of Tam o' Shanter's horse. More displays on the restoration of the ship and its impact over the years of its being a tourist attraction, and then, as ever, one exits via the gift shop.

It's not cheap (and not just to get in - nearly £5 for a coffee and small cake?!), but then neither was the restoration. Worth it? It was for me: but it may be years before I go again.
Posted by Autolycus at 13:42 No comments: 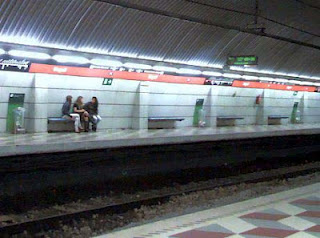 Posted by Autolycus at 15:54 No comments:

This apparent cathedral is the National Palace of Catalonia, set in some beautiful gardens, and now housing the national art museum (impressive Romanesque frescos, big Gothic collection, and a huge central arena that could almost double as a bull-ring, not that Catalonia approves of those now).

For most visitors, though, (and anyone who watched the Barcelona Olympics on TV), it's best known as the backdrop for the Magic Fountain, which puts on a display, to some mostly cheesy music, at weekends. It was too cold to hang around until after dark, when the coloured lights make it really spectacular, but all the same it was impressive:

Cold as it was (well, colder than I expected, especially when a sea breeze blew in and the clouds closed out the sun), it was clear that Barcelona is the kind of city where a lot of life is lived outdoors.

The early Saturday sun brought out children to sardana classes in Plaça Catalunya (sponsored by the leading department store - imagine Harrods sponsoring morris dancing classes on Trafalgar Square!), older people to sit on the Ramblas catching up with the world, and a multitasking busker:

More official entertainment for those who are out and about is offered by the public art in the streets and parks, and even on the water:

You're reminded of what the climate here can do when you see avocados and oranges growing out in the open:

But not everyone wants to offer the tourist a warm welcome:

Here are some of the most striking chimneys and ventilation shafts to grace a Barcelona roofline, on Casa Mila or "La Pedrera", one of Gaudi's most famous apartment buildings (so famous that you need to get there for opening time or be swamped by the deluge of tour parties and other visitors).

They look vaguely like Dr. Who's latest adversaries - though how many of them are decorated with fragments of broken plates and champagne bottles?. The humanoid appearance is hardly surprising, since his designs are heavily influenced by organic forms: to the point that (if I understood the exhibitions inside correctly) he did not produce fully worked out plans, rather sketches and concepts, influenced by his observations and studies of trees, shells, animal skeletons and so on.

The tour stars on the roof, and then you descend to the attic where all this is explained (there's a similar though, as I recall, less exhaustive explanation of all this at his other great creation across the street, the "gingerbread house" Casa Batlló). Much is made of the "catenary arch", the inverted shape of a suspended chain: turn the image of the chain model in this picture upside down, and you have the outline of the structure for one of his churches, complete with its supports, struts and buttresses. And looking the length of the attic, with a succession of arches supporting a single beam is like being in the belly of a whale.

Once you get down to the apartment on show, it all becomes much more conventional, since the (admittedly flexible and flowing) spaces are organised and decorated much more to the tastes of the early twentieth century. What sticks in the mind is the extraordinariness of what's on the roof, as striking a contrast to today's bland office-boxes as it is to the pomposities of its predecessors.

Posted by Autolycus at 10:42 No comments:

Somehow it's the rooflines in Barcelona that manage to catch the eye.

It's not just Gaudi (as here, at the gatehouse of the Finca Güell) that created such a striking impression, though he is the best known and most culturally respectable.

Almost wherever I've been walking, buildings seem to have their (often top-heavy) decorative topping, whether it be turrets on the Post Office, chimneys, finials lining up to draw the eye towards Gaudi's Sagrada Familia, a Madonna doing something that looks very dangerous indeed, Christopher Columbus waving mariners towards the Customs House, a pair of daffy gateposts, or a colourful crown to mark an otherwise unremarkable street corner.

Posted by Autolycus at 14:29 No comments:

An interesting discovery on arriving in Barcelona: the metro's train describer display screen in Catalan reassures you that the next train will be a "PROPER TREN" (but if you should be staying out late, as people in Spain tend to do, you may find yourself relying on a Nitbus).

In that dead spot of the evening when northern Europeans are already winding down but Spaniards are barely getting ready for dinner, I was sitting in a bar, almost deserted but for me and the staff (Chinese, as it happened), and a TV displaying impressive diving skills - for a lower league football match. About half a dozen Scandinavian ladies of a certain age arrived, and started ordering (in English): but "Irish coffee" produced a blank response, as did "ice cream". I tried suggesting "café irlandes", but that was no help. "Café con whiskey" got a bit further, but the idea of putting the two together in one cup was clearly more than strange.

But what really stalled the conversation was "cream", in English or Spanish (someone once told me that a lot of Chinese people literally can't stomach dairy products, so this may not be surprising). Eventually, the barman went to look for help, and came back with an Indian man, who eventually managed to find the right word(s) in whatever common language they could find.

The others had long since settled for plain black coffee, and given up on the idea of ice-cream, when a cup was delivered with some whipped cream floating on top; but, to judge by the expression on her face, the lady in question clearly felt she needed a rather stronger slug of whiskey in it.
Posted by Autolycus at 06:18 No comments:

Finding accommodation in Docklands isn't easy. As the estate agents' begging letters keep telling us, there are prospective tenants and buyers just waiting to snap up anything that comes on the market.

It doesn't seem to be any different for the birds around here. There are "official" nesting rafts on the docks, moored out in the middle of Millwall Dock, where the residents are permanently on show; but there's a quiet, unofficial-looking spot between the moored barges and the dock wall, which many seem to find safer. Here the coots and a pair of swans have been nesting for some years, protected by solid wooden fenders that keep the barges away from the wall: and now a pair of crested grebes are trying to join them, collecting an assortment of junk ("I said it'll come in useful some day!").

But this is not the quiet, neighbourly sort of spot that it seemed to be. At the other end of the fender, a pair of coots seemed to have abandoned an egg, as a handful of other coots swaggered in and started squaring up to each other in the traditional East End "D'yer want some then, eh? eh?" style. One coot, perhaps trying to escape, found its way blocked by the irritated swans, as the confrontation spilled over to the grebes' end of the fender, and a shouting match ensued, just as a police siren went off.

Posted by Autolycus at 16:28 No comments: 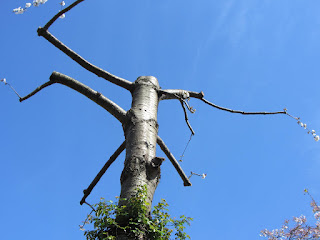 and there's this. I suppose this ornamental cherry had got a bit large for a small town garden, reaching to roof level as it had.

But this is almost surreal.
Posted by Autolycus at 15:50 No comments: