Monday being the traditional celebration of a certain Scottish poet, my local Waitrose has (oddly, perhaps, since there isn't a noticeable Scottish community in the area) put out a rather large special display of haggis. It looks like a national promotion, since it comes with a glossy poster proclaiming the day.

Only - someone obviously hasn't bothered to check the man's name, so they're suggesting we celebrate something called Burn's Night.

Does no-one care about apostrophes any more?

Posted by Autolycus at 15:14 No comments: 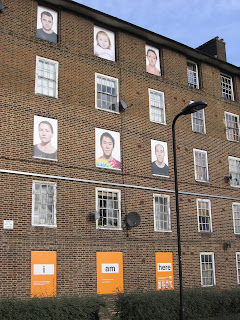 And on the way home in Shadwell, in the late afternoon sun (ah yes, that's what it's called), a blackbird was singing.
Posted by Autolycus at 17:05 No comments:

The temperature may not have been much above freezing for nearly a month, with barely a couple of hours of sunshine in all that time. But, in amongst the dead and wilting remains in my window-boxes, the pelargoniums and petunias are still putting out the odd floret, and I'm sure there's a new clump of nemesia - in full flower.
Posted by Autolycus at 15:25 No comments:

But there's been some fun playing with my Christmas toys. I've loaded up my spiffy new digital photo frame as far as I can. Once again, I contemplate the thought of digitising all my old photos, and then all the different forms of audio recording I have (hundreds of 78s, vinyl LPs, cassette tapes). After about five seconds of that, contemplation passes to procrastination - indefinitely.

I have another new (to me) toy, the penny finally having dropped that perhaps it would be more economical on electricity to use a microwave for the amount of stuff I freeze. So far, it works excellently on soups and scones, but not at all on crumpets (might as well put those straight into the toaster). I shall leave it to the weekend before I risk experimenting with (if the Internet is to be believed) exploding porridge.

For a while, e-book readers intrigued: Waterstone's have been pushing the latest model of the Sony, and the papers are full of Amazon's apparent success with the Kindle and the new business-oriented Que. Looking at an apparently ever-increasing collection of books (they breed, I tell you), the thought of having everything on one pocket-sized machine is immensely appealing.

But then, so much depends on how one actually uses books. Books are more than just the words on the page. For many, the physicality of paper, illustrations and layout is an important part of the experience. For others, books need to be read in context with others: researchers need to be able to cross-refer, so what would help them is the ability not just to make notes, but to link, and perhaps (assuming e-book files can have a standard set of bibliographic data) automatic construction of citations and bibliographies.

What we have here is the issue of convergence that makes so many new technology developments uncertain: which digital functions do you combine with which in a single device? I know someone who reads books on her i-Phone; the Que runs diary functions, spreadsheets and other office documents, and can download news updates; the Sony not only has an MP3 player built in, but it displays photographs (though the particular screen technology it uses renders them as a rather pale monochrome which soon loses its appeal). If there were a way a user could, on a single device, switch between the e-paper technology of e-book readers, and the backlit screen of a conventional computer (with, of course, full colour).......

And then there's the book-on-the-beach problem: a book can still be used even covered in suntan oil and ice-cream, and it can be left on the towel with far less worry than a £150 piece of electronic kit. And who wants to lose those stocks of abandoned books that some hotels accumulate, providing an opportunity on a rainy day for an in-depth study of the appeal of Netta Muskett?
Posted by Autolycus at 18:10 No comments: 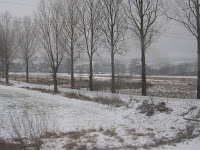 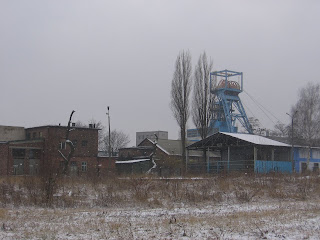 There doesn't appear to be anywhere to eat nearby, and if I don't get the bus that's coming, I'll have to wait an hour, since it's Saturday. The only thing to do is to run for the bus, head back to the train for Krakow - and be grateful I've got the option.
Posted by Autolycus at 17:32 No comments:

Posted by Autolycus at 17:03 No comments: