Before there were railways, or even decent roads, the canals were the way goods got to and from the ports (and for quite a long time after the railways started competing, too); so where there are docks, there are canals to connect the Thames to the other main waterways into the industrial heartland of England. Last Sunday started bright enough to entice me out of the house to explore the eastern end of the Regent's Canal, which runs from Limehouse, right round through what is now central London. 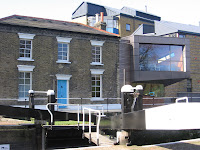 What is it about living near water that so attracts people? In the hierarchy of chic, there's the river, then the docks, and then the canals. Where the canal joins the Thames, at Limehouse Basin, the area is thoroughly gentrified, with plenty of floating gin palaces moored up alongside the gleaming flats, a few of the traditional canal narrowboats making up the authenticity quota, and along the canal this striking modern extension of a lock-keeper's cottage. The tide of new apartment buildings is lapping ever northwards, but further away from the river, more of it is shared ownership, student and public housing. On one side of the canal is Mile End Park, a modern development, squeezed into the land between the canal and the main roads, with different areas dedicated to sports, ecology education and other contemporary good works. This, by the way, is a seat.

The journey continues past the much older, more traditional and elegant Victoria Park. In both the parks, the early spring flowers were well out: the crocuses were starting to go over as the daffodils come into full bloom, with forsythia and the first ornamental tree blossoms well on the way. On the other side of Victoria Park, the canal comes to Hackney, still in many Londoners' minds a byword for "gritty urban", but (perhaps for that very reason), in many parts - and particularly here at Broadway Market - a magnet for "bourgeois bohemia". The traditional eel shop hangs on, amid the vintage clothing, retro furniture and poshed up bars and restaurants.

Right by the canal is a cycle café (or a bike repair shop that sells coffee and snacks). Here I found a bugle horn for the bike: acceptably adult and retro in style, and an agreeably comedic sound, loud enough to stop the bullying coots and send them scurrying along the canal.

From here, the surroundings are relatively run down public housing and the backsides of nondescript warehouses and factories; I could judge the canal was quite shallow here, from the fact that I could see the tops of traffic cones only a few inches below the surface. At one point the canal had been closed and partially drained for repairs, and sure enough the quantity of tyres, abandoned bikes and even a bath on top of accumulated mud and (I suspect) builders' rubble left little space for water above; but there are plenty of narrowboats moored up in various places, even here - and here's a dramatic modern school towering over an eel importer's business. Eventually, the path reaches "De Beauvoir Town" (the kind of place where you'll find a doily even in a narrowboat window), and the canal goes into the long tunnel towards Kings Cross.

Here the path leaves the canal-side and leads up to a quiet street of elegant early Victorian townhouses in Islington. Suddenly I recognised the name: this is Noel Road, once the home, and eventually the site of the grisly murder, of one of the most striking figures of the 1960s.
Posted by Autolycus at 18:24