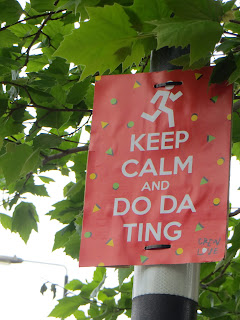 A week ago, there were tens of thousands of people running past here, and leaving however many squillions of water bottles, sweet wrappers and assorted other detritus. A miracle of cleaning-up gets under way almost before the last dogged competitors have staggered past, with most of the rubbish gone before dark the same day; but some odd freelance signage, like this, survives.

At least, I think this was something to do with the marathon - but whether it was a message of encouragement to a runner, or to do with some music promotion, it seems unusually small and discreetly tucked away under the foliage. 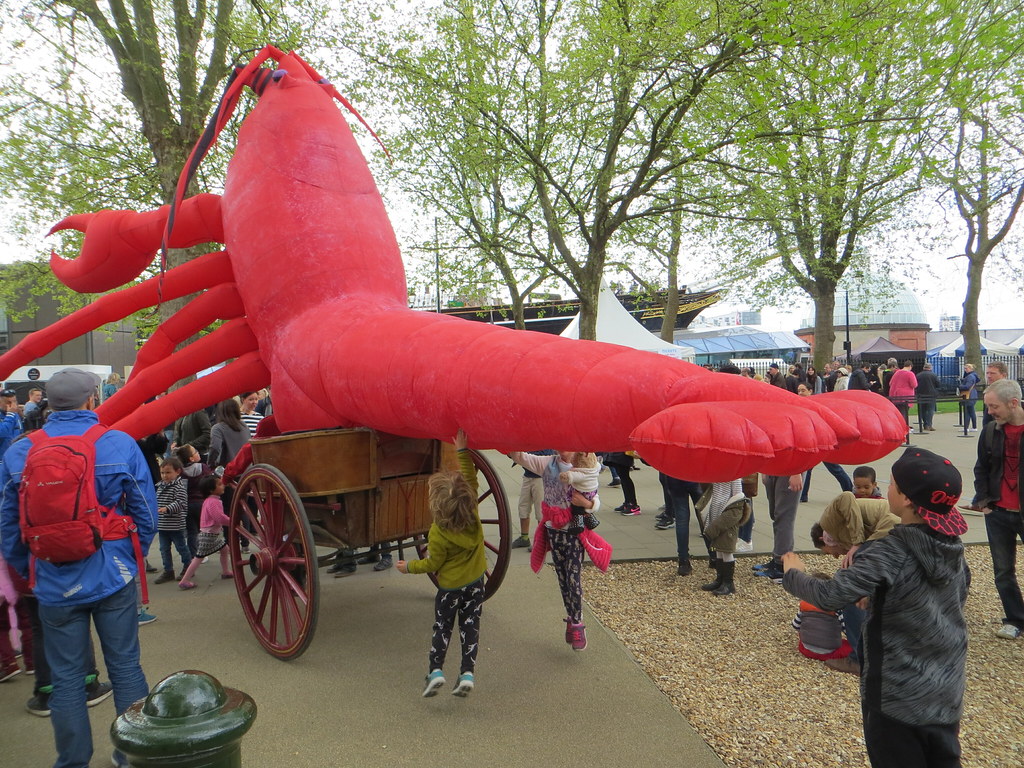 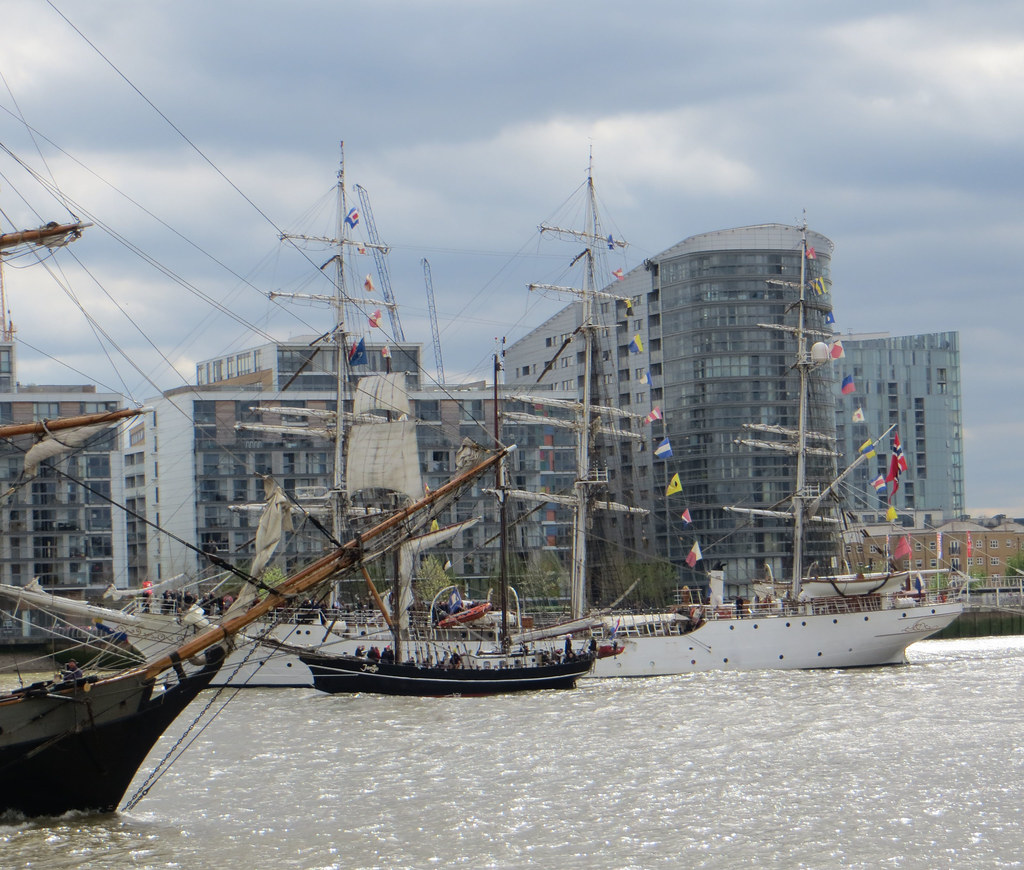 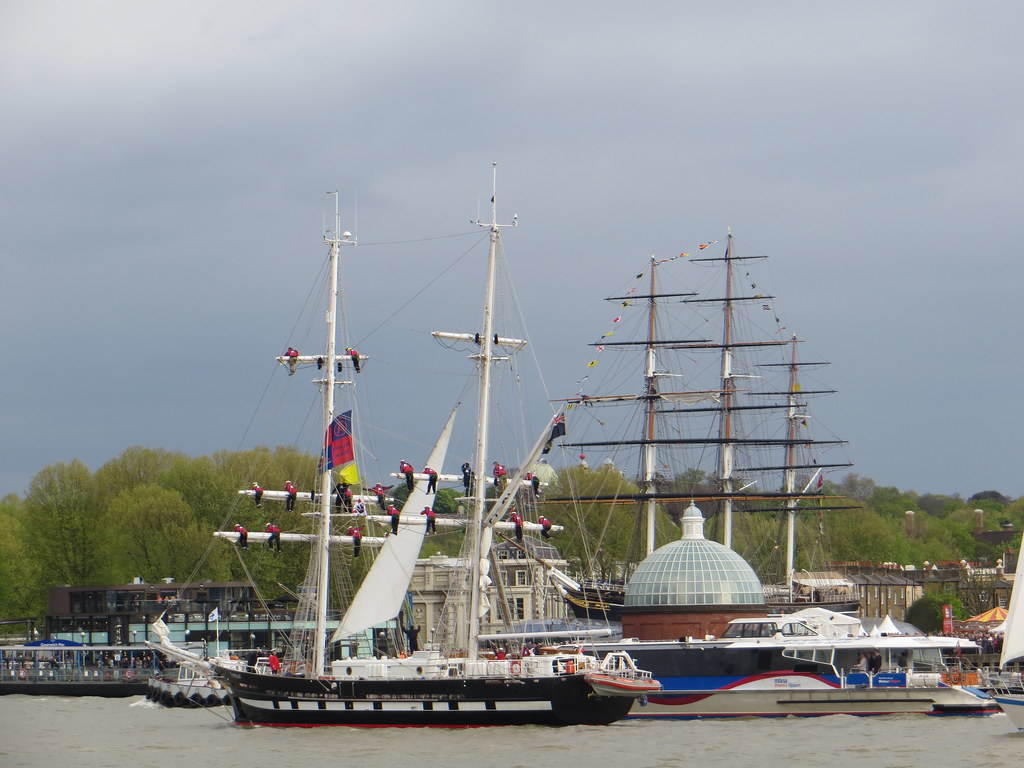 Up on the ceiling 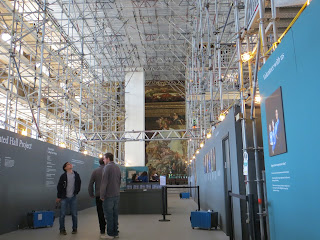 This is as much as most people are going to see of the Painted Hall at the Old Royal Naval College in Greenwich for the next couple of years, unless they pay for a guided tour of the current restoration work.

One phase of the project was completed some time ago - the far end section, glorifying the Hanoverian monarchs George I and II and their Navy's triumphs. This you can contemplate while the guide introduces the tour and the history of the hall.

Now the conservators have moved on to the main part of the Hall's ceiling, and to see anything, you follow the guide up through the scaffolding to a platform right underneath the ceiling, for an explanation of the painstaking work of cleaning and repairing the painting, and the extravagant iconography. 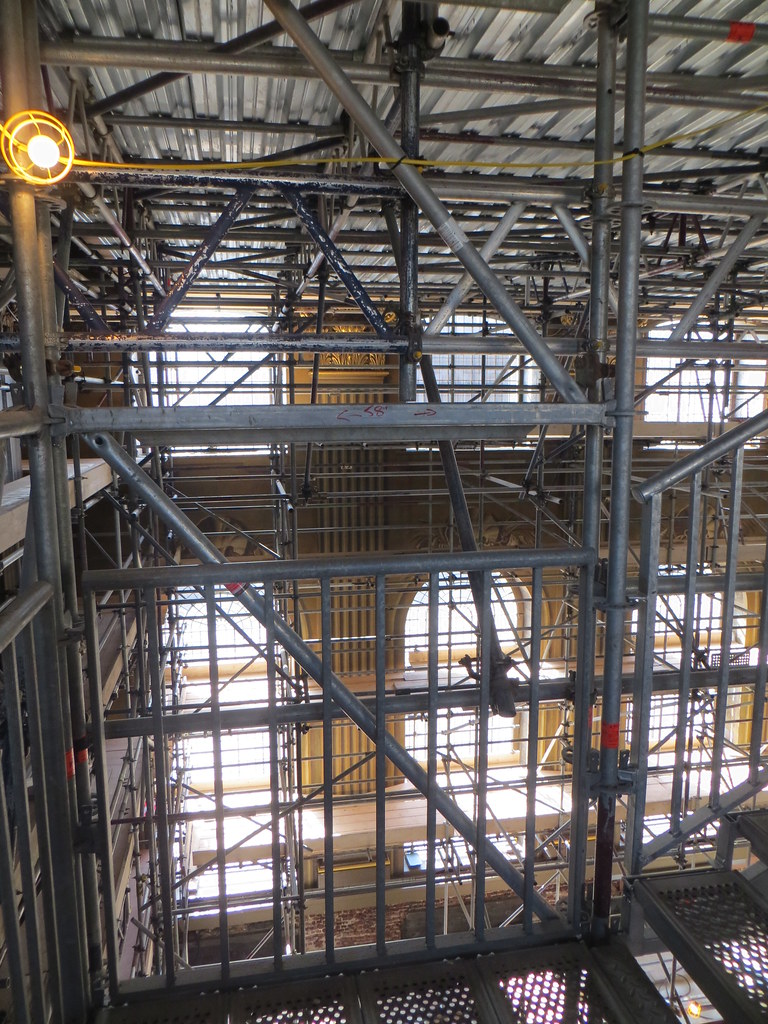 Everything revolves around the central figure of William III, with his wife and co-monarch Mary seated beside him, she popular, lively, pretty and cultured (and credited with the idea of setting up this home for retired seamen in the first place), he dour, withdrawn and suspicious  - but, like Mary, a legitimate Protestant grandchild of Charles I, and even more attractive to Parliament - a history of successful generalship defending the Netherlands against Louis XIV. So while she sits to one side (with, as the guide points out, some daring workman's signature across her bosom, dated 1797), he triumphs over Louis XIV and the Pope, receiving an olive branch of  Peace and delivering the red cap of Liberty to captive Europe.

They are surrounded by images of the virtues defeating vices, approving figures of classical legend like Neptune, Juno and Hercules, the seasons, cherubs and roses and assorted images of naval grandeur and Greenwich's importance to astronomy and navigation.

At a less exalted level, the figure of Winter represents the retired seamen for whom the building was created - and the model chosen was the oldest pensioner of the time (and, it would seem, a somewhat rambunctious one).

A taxi marooned on a roundabout... 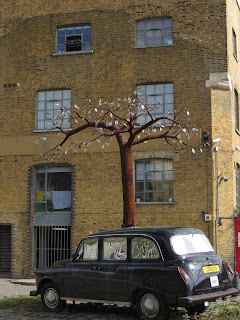 .... with a metal tree sprouting through its roof is probably a sign of artists somewhere in the undergrowth. 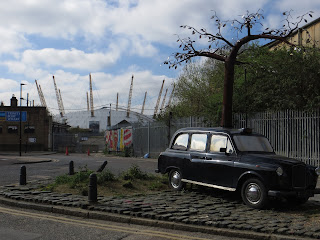 Sure enough, down a road bordered by anonymous walls and what look like sites just awaiting the latest batch of expensive rabbit-hutch flats is Trinity Buoy Wharf, once the home of a shipyard and the base for Trinity House and its lighthouses, but now an enclave for arts and crafts, and seemingly holding another open weekend.

Except that not much seemed to be on view, apart from the cafés (where there's art, there's a catering opportunity), and these ladies. Still, it was a good excuse for a bike ride on a sunny morning. 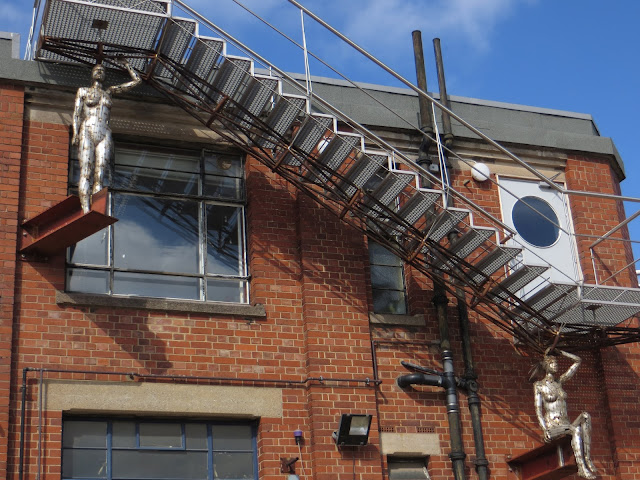