Sometimes it seems as though all the interesting events are repeats of ones that I've posted about before. Next year, of course, it will be different, with the Really Big Event. Yesterday, an uneasy mix of ceremonial and young people's rally in Trafalgar Square (with Our Beloved Mayor™ sounding even more like an over-caffeinated pre-teen than usual: over-generous hospitality from the Official Olympic Cola Beverage?) announced that we have less than a year to go, and we saw the inside of the Olympic Aquatic Centre in use for the first time (and very impressive it looks, too).

But this week saw a number of other events designed to get us all in the mood, and not all sporting, for there is to be a whole Cultural Olympiad programme as well.

It was a pity the Sky Orchestra launched so early in the morning with the wind in the wrong direction to come our way, as it looked spectacular on the TV news: but it was flying over bits of London that could do with some cheering up. 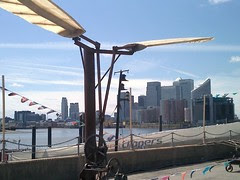 Nearer to home, Trinity Buoy Wharf staged an open weekend, with some of its resident artists showing their wares. The mixture wasn't too different from the last open weekend I visited there. Andrew Baldwin's mechanical sculptures were much in evidence, clanking away deconstructing human figures and re-assembling them with as industrial a sound as might have been heard on the site when it was building ships and light-buoys, all under a pair of majestic, if slightly alarming, mechanical wings. 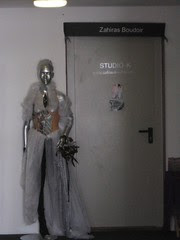 A couple of studios in the Container City were open, if not exactly inundated with people, and there would have been music workshops for enthusiastic children, if I had stayed.

In the lighthouse, the Longplayer's singing bowls continue to bong away mysteriously and evocatively, as they will be for the next 988 years or so (all being well).

It tends to make you wonder just how soon all the new buildings around the riverside here will seem to have been as passing an event as the Olympics.

Posted by Autolycus at 10:08 No comments:

I went into the kitchen this morning and filled the kettle to make tea to have with my breakfast, filled a bowl with cereal and some milk from the fridge, wondering when I'd emptied the milk jug, and took the bowl through to the living room.

Only to find the bowl of cereal I'd taken through barely minutes before.

Thank goodness I don't have gas.
Posted by Autolycus at 17:33 No comments: 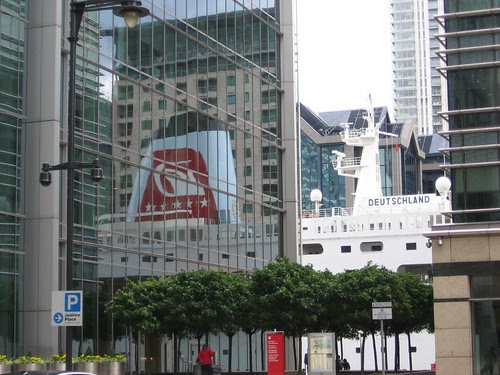 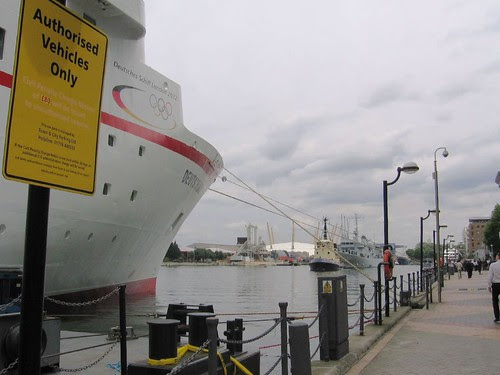 Posted by Autolycus at 09:33 No comments:

Must be something on today