Spotted in the café in Foyle's bookshop:

And quite right too.
Posted by Autolycus at 14:55 No comments:

Bike lights, to be precise. I've never been bothered about riding in the dark, probably because I learnt to drive in the winter and therefore mostly in the dark. The basic, regulation, one white, one red would be enough. Nothing fancy, just what you need to stay within the law and drivers' eyesight.

But then a pothole shook the rear light loose, and its red cover smashed. Only after I'd bought a replacement did I realise that the bulbs still showed red, as long as I held the batteries in with some clingfilm and sellotape: so now I had a spare to clip on to the back of my collar as a supplement.

Then I bought my Winkku, which also has front and rear lights. So now I could have one red light showing to one side as well as the original on my collar and the replacement on the saddle post.

And then my rear reflector cracked and fell off, and the only replacement I could find that fitted and helped hold the rear mudguard in place was yet another light with all sorts of sparkling and flashing options. How could I resist?

But that was before I saw these:

Posted by Autolycus at 19:27 No comments:

One advantage of cycling is that you can stop and explore the byways - and in the City, there are more various and mysterious back alleys than might be expected. Behind the massive office facades along the main roads, there are passages and courtyards that look little changed since Victorian times or even before.

And that's how I came to find, among the Victorian survivals and postwar Georgian pastiche reconstructions, modern nods to local history. The church of St James Garlickhythe stands where once there would have been a riverside wharf, and now overlooks a flow of cars and lorries; outside it stands this acknowledgement of its links with the Vintners and Dyers companies, whose representatives row up river each spring to mark their share of the new season's swans, which for some ancient reason they share with the Crown. 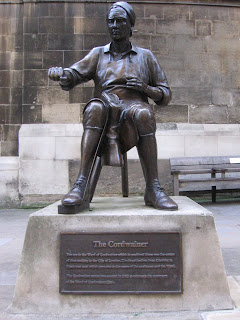 A little further on, this statue of a cordwainer (shoemaker) sits in Cordwainer Ward, on Watling Street. Like most of the City's streets and especially its back lanes, it's quiet, almost empty, at the weekends, the customers for its shops and cafés being the local office-workers; it might be a street in a sleepy village or country town. Hard to imagine that the high road between Roman London and the garrisons of the north west must have run along here; but at one end, the shiny new shopping centre opposite St Paul's seems to be drawing in weekend customers - perhaps the existing businesses will try to tempt them further down the street.

A litle later, I came across thsi more convivial way of cycling around London, but it might be too large for those back lanes and alleys: 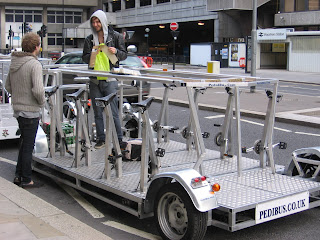 Posted by Autolycus at 19:35 No comments: