Where did you get that hat?

"If you want to get ahead, get a hat" - according to a now defunct "gentlemen's outfitters" of the 1940s. In one of the more bonkers events of this extraordinary summer, sundry hat designers have, for the last four days under the title Hatwalk, displayed their ideas for decorating some statues of those who managed to get ahead pretty well on their own without the aid of millinery.

The newspapers have given most attention to Nelson (who, being not without a certain vanity, might have appreciated the new look his old hatmaking company have given to his statue), but he is far from alone. 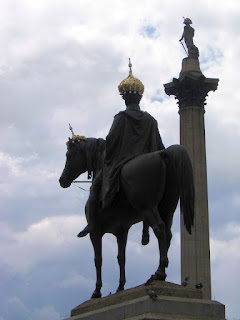 In Trafalgar Square, he faces a little competition. Not only is King George IV sporting a hat - and horse - themed for the Brighton Pavilion, the sternly imperial Generals Havelock and Napier have been given some sort of fashion statement - and today, some supporters of the Dutch Olympic team unwittingly got in on the act.

The Duke of Wellington is twice favoured with a new titfer, at Hyde Park Corner and outside the Bank of England, likewise Shakespeare. Sadly, the Bard's baseball cap barely lasted a few hours in Leicester Square, but in a quiet corner of the City, his hat proclaims him a "constant sun".

Roosevelt and Churchill look as though they have found a new reason to share a laugh; but what Burns and Brunel did to deserve a lopsided flower fascinator each, I don't know - nor why the great Whig Charles James Fox has a wedding hat or a Duke of Bedford a lurid orange sombrero complete with artificial pigeon.

Beau Brummell's peacockery might not have been out of place in his own day; and both Sir Arthur Sullivan's Mikado hat and Captain John Smith's flamboyant feathers make a certain sense, too. Queen Victoria, however, remains unamused, as well she might.
Posted by Autolycus at 20:58 2 comments: