More adventures with a microwave

And German rhubarb is tasteless.

That is the end of this newsflash.
Posted by Autolycus at 13:56 No comments:

"Right now, British rhubarb is in season and at its very best", says Waitrose as it urges us to try making the Blessed Delia's rhubarb and ginger brûlée. Well, that's as may be, but in my local branch, the rhubarb's come from............... Germany.

What new Brussels plot is this? Has the Daily Mail been told? As Yorkshire mourns (it doesn't take much), is the ghost of Captain Mainwaring adopting the appropriate shade of rhubarb-red fury?
Posted by Autolycus at 15:34 No comments:

It wasn't the sunniest of mornings, but there was some cheer on the way to work: 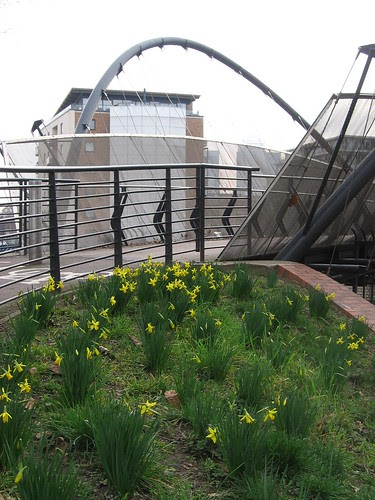 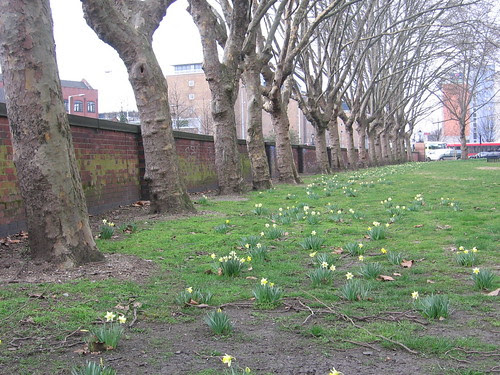 Posted by Autolycus at 13:38 No comments:

Signs of spring, in St Anne's churchyard, Limehouse, this morning: 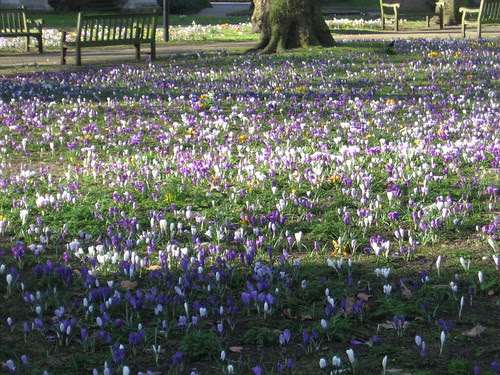 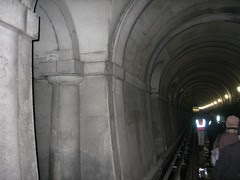 One doesn't expect to be asked to put on surgical gloves to enter a tube station, particularly not one that's just coming out of a long and expensive sprucing up.

But today, it wasn't the station that was the focus, rather the tunnel: between Rotherhithe and Wapping runs the world's first tunnel under a waterway, and today was the first chance in over 140 years (and the last for who knows when) for pedestrians to visit and walk through, before the East London Line is reopened after its refurbishment and extension. So health and safety required a degree of protection, in case any of us should happen to touch the grimier parts of the walls or any of the water than still drips into the tunnel; and there were cheery handouts about the symptoms of leptospirosis to explain, in excruciating detail, exactly why. 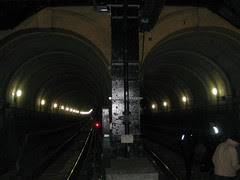 The tunnel took the best part of twenty years from original conception to its full opening, beset as it was by financial problems, lack of trust in the methods proposed by Brunel father and son for its construction, and the sheer difficulty of tunnelling, with the water breaking in on several occasions - and don't forget that in the early to mid-nineteenth century the Thames was an open sewer. As the tunnellers advanced, the air got worse; at times, if the water wasn't breaking in, pockets of methane were igniting - and sometimes both at the same time. Besides the deaths in accidents and flooding, many miners fell victim to the poisonous air underground, and disease; the strains of the job must have contributed to Marc Brunel's stroke and heart attack, and his son Isambard was nearly drowned more than once.

When it eventually opened, the tunnel was never the handy means of shifting cargo from one side of the river to the other that had been envisaged, and became instead a pedestrian walkway, with the arches you can see above used for shops and souvenir stalls. After twenty years it was taken over for a railway tunnel, which it has been ever since, and will soon be again. 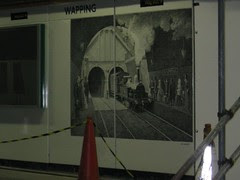 But for today, what took twenty years to build took us twenty minutes to walk through, however cautiously we might be watching our feet. Here and there the original render and brickwork have been left exposed, and make a sharp contrast with the shiny new station decorations.

There was just as great a contrast between the heroic efforts of construction, and the unheroic profiteers who occupied the tunnel after its opening (a million people visited in the first fifteen weeks of opening - at a penny a time). The guide regaled us with the tale of Queen Victoria's impromptu visit, a stallholder's gallant protection of her footwear from the mud with the handkerchiefs on his stall, and his subsequent success in selling off the handkerchiefs "as trod on by the Queen" - only, after the first few, the footprints got suspiciously bigger. And then there were the ladies of more doubtful reputation who were seen to take advantage of the gloomy gas light...

As we came back to the station exit, it was hard to believe this otherwise prosaic-looking piece of track had taken so much to build - or that, as a PR stunt, the young Brunel had hosted in the tunnel a grand dinner for the great and good. No surgical gloves for them - and yet they survived.
Posted by Autolycus at 18:12 No comments:

What stops the newspapers flapping away in the March breezes, outside the newsagents in the middle of a council estate in Elephant and Castle, where I stop to buy my daily fix?

Not an old-fashioned shop scales weight, nor a half-brick, a lump of abandoned concrete or a stone from someone's barren backyard: but a large knob of root ginger, in a suitably Esther-Rantzen-amusing shape.
Posted by Autolycus at 16:48 No comments:

It must be spring

This is the first week I've done all my commuting on the bike since before Christmas. For once, the weather provided no excuses at all.

In the process, I seem to have become a bag-person. Various necessities are all kept in a bag, so that they can all be strapped down together in the basket. There's a pump, spanner and tube repair kit, a reflective waistcoat for after dark, the mirror and lights (you don't think those can be left on the bike in London, do you?), towel and shower-substitute spray (alcohol, witch-hazel and water), jumper to put on at the office. And the map. And the camera if I remember. And a pen. I think that's everything.

The trouble is, there are bags within bags. The mirror has its own little bag to protect the surface. The jumper has a bag to stop it getting dirty, or snagged on the spanner. The towel and spray have their own bag. There's a spare of the mirror bag for all the lights all go together (to make them easier to find, I thought).

But the start of most journeys is still dogged with desperate rummaging, accompanied by sighs and mutters, as the things I'm looking for hide in odd corners or disguise themselves to the touch as something else. It's just like all those people who hold up bus and supermarket queues looking for their purses and passes.

Ladies, I feel your pain (but all the same, passes and small change are what pockets are for, you know).
Posted by Autolycus at 10:26 No comments: