Or... navel-gazing from the inside. Which is by way of explaining the fetching photos of my innards I was given yesterday afternoon, my doctor having decided that thorough investigation of my recent indigestion required an endoscopy.

Not an experience anyone would want to repeat (unless they're really peculiar), but not as bad it might have been - I was in and out within the hour. And the upshot appears to be that there's nothing that requires treatment beyond carrying on with the pills (or, in the words they've managed to avoid saying, just something one has to expect with increasing years).

I did think it might be a good omen that, when I arrived, the TV in the waiting room was showing Brief Encounter.

Less so, perhaps, the way someone in the waiting room tried to explain to a nurse that his daughter's sleepiness might not just be down to her sedative:

"She's got slight necrophilia".
Posted by Autolycus at 16:41 No comments:

Between us, we'd been to Edinburgh often enough and over so long a period that we've almost forgotten our last visits to the most obvious tourist sights: so no apologies for joining the throng to catch up on our Scottish history at Holyrood Palace and Abbey, and the Castle, once again.

Posted by Autolycus at 12:17 No comments:

Posted by Autolycus at 16:42 No comments:

A weekend in Edinburgh

For a Londoner born and bred, it would be a bit hypocritical to make a great deal of my Scottish ancestors. I have been to Edinburgh plenty of times to find out more about them (and for what it's worth, as is no doubt statistically probable with most people, there is much more geographical and ethnic diversity the further back you go, of which more later); so while my sister-in-law looked up her family history this weekend, my brother and I went along just to visit.

After I arrived there was time for a lung-stretching stroll up, round and down a bleakly wet Calton Hill for its perspective over Edinburgh city centre before meeting their train, and an evening stroll to catch a view of the Castle by night:

Friday saw us checking out the Surgeons' Hall museum: not just body parts in bottles, but an overview of the development of surgical techniques, with a detour to explore the origins of Sherlock Holmes, and a chance to test your skills at manipulating remotely-controlled instruments. Fortunately I already known I can never get the teddy bear in those things on seaside piers, so there'd be no chance of my killing someone trying to do a similar job in surgery. Then we stretched our leg muscles down the Royal Mile and up again, calling in at the Parliament for coffee (the Debating Chamber wasn't in use, so visitors could walk in, admire its light and functional interior - and note that, if debates become too heated, the Presiding Officer has a fire extinguisher within easy reach), peering down narrow closes (and discovering the charming Dunbars Close Garden), stopping off to visit St Giles's Cathedral, the Writers' Museum and a very windswept Castle Esplanade. A chance glance at the posters outside the Canongate church revealed a concert that night by the Kammerchor Chemnitz and an Edinburgh University choir, which turned out to be an unexpected treat. 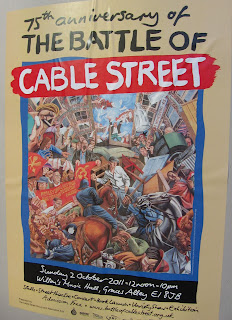 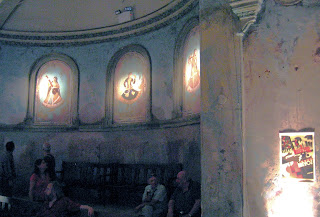 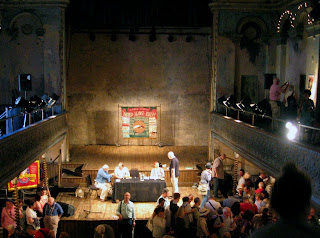 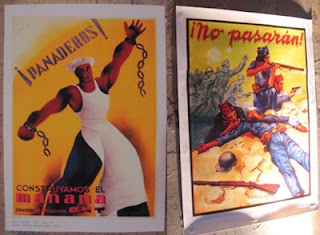 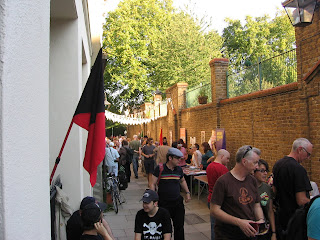 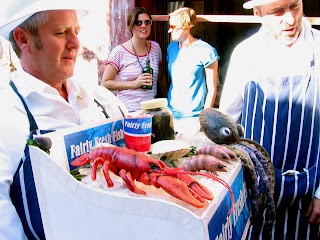 Posted by Autolycus at 08:55 No comments:

Being a bit slow on the uptake this week (that hot weather managed to bring a cold with it, can you imagine), it's taken me until now to react to the startling news that Belgians have taken over British territory, albeit temporarily.

I can't think why (though I suppose the absence of a government in Belgium let them think they didn't need permission) It isn't as though there's a brewery or a chippy there. It's not called Rockall for nothing.

Posted by Autolycus at 17:32 No comments:

They get a different class of slogan scrawler at Watney Market: 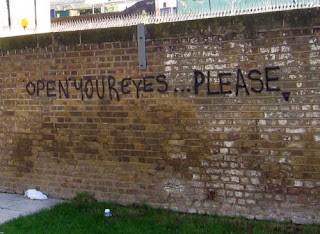 Posted by Autolycus at 18:42 No comments: