That rising ground and greenery has the unglamorous name of the Mudchute - because that's what it is. The built-up berms or embankments formed settling ponds for the mud pumped out when the dock just the other side of the road and railway line was dredged out. Through the gate and up on to the pathways, and with a little imagination, that industrial beginning has now almost become countryside. With the near-disappearance of road and air traffic in the lockdown, it's certainly quiet enough.
Apparently it took decades for the sludge to settle safely enough to be walked on, but settle it did, though there are clearly enough reserves of water to keep the trees and bushes green in the long dry sunny spell we've been having.

It looks as though someone has been setting up their home office here while the good weather was on - and the bees never stop working, of course:

Back in the First World War, allotments were set up here for local people to grown their own fruit and veg, and are still in productive use:

But allotments and open space are not the whole story, nor are bees the only livestock, for most of the space is devoted to the city farm, and those open spaces would normally have a range of animals out in the fields. With the lockdown making riding lessons and school group visits impossible,  most of the large animals seem to have been moved elsewhere, or confined to pens inaccessible to visitors, even from a pathway,  though there are sheep, goats and llamas in their usual pens (and the sheep put to work to replace expensive human mowers in different fields), and a pair of donkeys in the stables. The signs of the farm's educational mission are still everywhere, with plenty of warning notices about what to do and not do around or near the animals.


The café is of course closed, and one can only admire the roses from outside. The pigs don't much seem to care.

The pens for the pigs and some of the other animals are concrete structures that appear to be old emplacements for anti-aircraft guns from the World War II, and some years ago one was restored and an example of the original guns brought in as a historical display. This part of London was badly battered, though you wouldn't think it now. 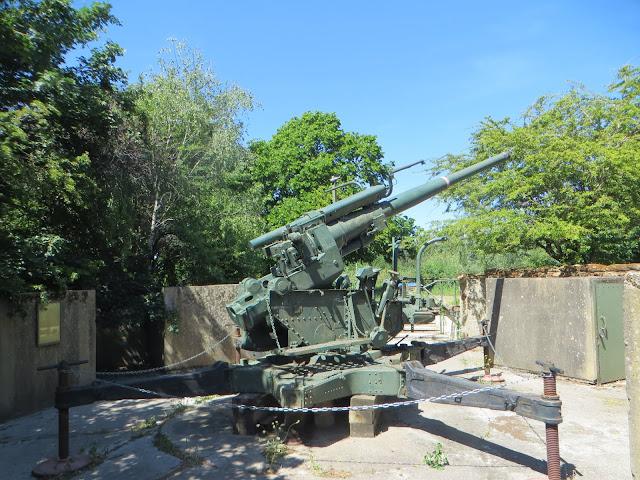