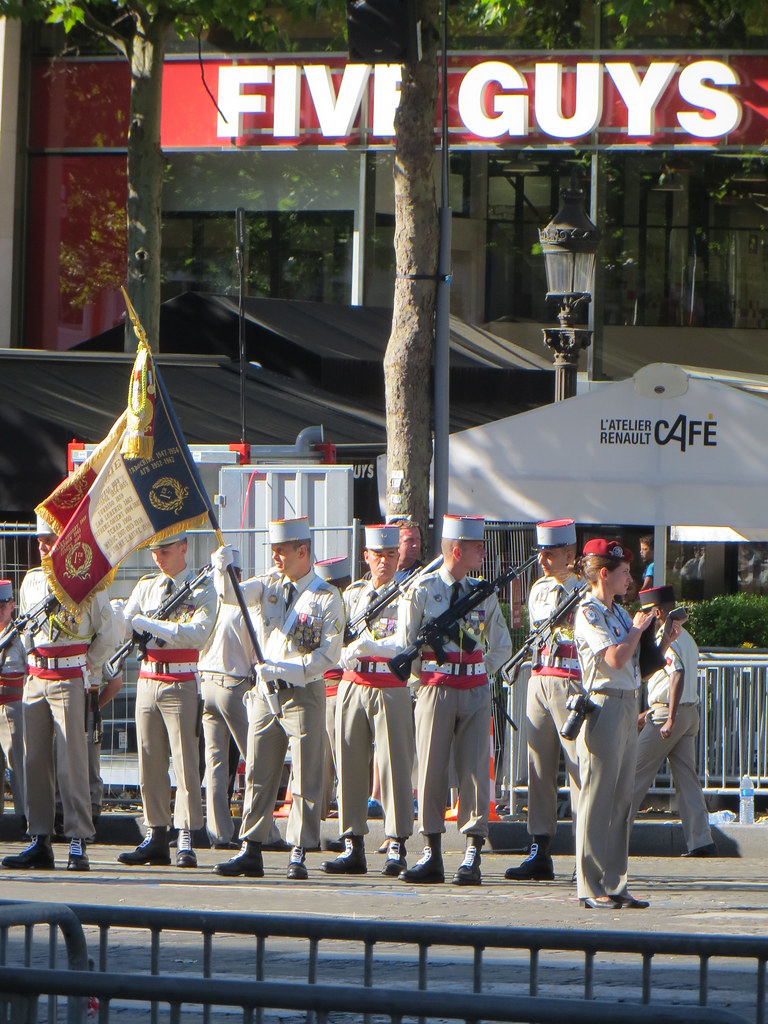 After some showery days and one or two heavy overnight rains, the weather turned fine for the annual military parade for July 14th.

Although the lower end of the Champs Elysées is lined with grandstands, presumably for the great and good, the sans culottes are able to stand at the upper ends, where the various military units taking part get into formation and wait their turn to march off.

And there is, of course much waiting, and (given the times we're in) a surprisingly relaxed atmosphere (though intending spectators have to run the gauntlet of security searches a good way back from the parade, before they're allowed to get near it, and the metro stations directly on the route are  all closed).

Eventually, the general in charge drives down inspecting the troops (not much he can do if they're not up to scratch at this point, though), then the Garde Républicaine escorts the President  down at a trot to his position at the end of the parade on Place de la Concorde. President Macron got the biggest cheer from the crowd near me, though for some reason they also seemed particularly keen on the prison officers' contingent, and of course the firemen bringing up the rear.

I had been warned that if you were in a position to see anything at all of the parade, you would be under the trees and therefore unable to see the planes which, unlike our Trooping the Colour, lead off the parade as such. Thereafter there's something of a stop-start for the different contingents as they catch each other up, and while various additional ceremonials take place at the Presidental saluting  base. Don't tell the general, but during one of the lengthier pauses, one of the tank commanders got out his camera and starting photographing the crowd.

Once we'd all managed to disperse (not much in the way of police control to open up ways to keep people moving), it was surprisingly easy to find a bar nearby that wasn't inundated with people, so I managed to catch the tail end of the official TV coverage, which showed some interesting power play between Macron and President Trump. At the end of the ceremonies, the general in charge came up to be formally greeted by his President (of course), with Trump hovering somewhat awkwardly a few paces in the background. Macron's greeting became an extended and lively conversation, with the hovering Trump looking more and more like the cousin who can't not be asked to be bridesmaid; eventually Macron went back towards his seat and the general, somewhat hesitantly,  likewise turned to leave. Only after a few steps did Macron turn back, and wave the general forward again, in a "Go on then, you might as well" sort of way, to introduce him to Trump (who to his credit did everything congratulatory you would expect). No doubt about who was in charge in that exchange.

Not so down and out now 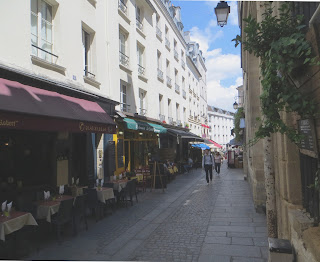 Nothing too remarkable about this street in among others around the Place de la Contrescarpe and the Rue Mouffetard, buzzing with people visiting the many restaurants in the area.

One reason for their doing so, and for so many of them being American, is that this general area was the classic "Left Bank" for writers and artists of the 20s and 30s, where many an aspirant moved in for a while, and many a building round about has a plaque to mark the passage of Joyce, Hemingway and so on.

One who is not favoured with a plaque is George Orwell, who lodged along this street while working as a washer-up in a local restaurant, an experience whose  misery is recorded - and possibly somewhat embroidered - in Down and Out in Paris and London. The street must, by all accounts, have looked and felt much less up-market then, by comparison (to judge by the estate agents' windows) with the entire area nowadays. All those plaques must add a certain value - to the point that someone has chosen to add one to celebrate the great achievement of eating cake while on a diet: 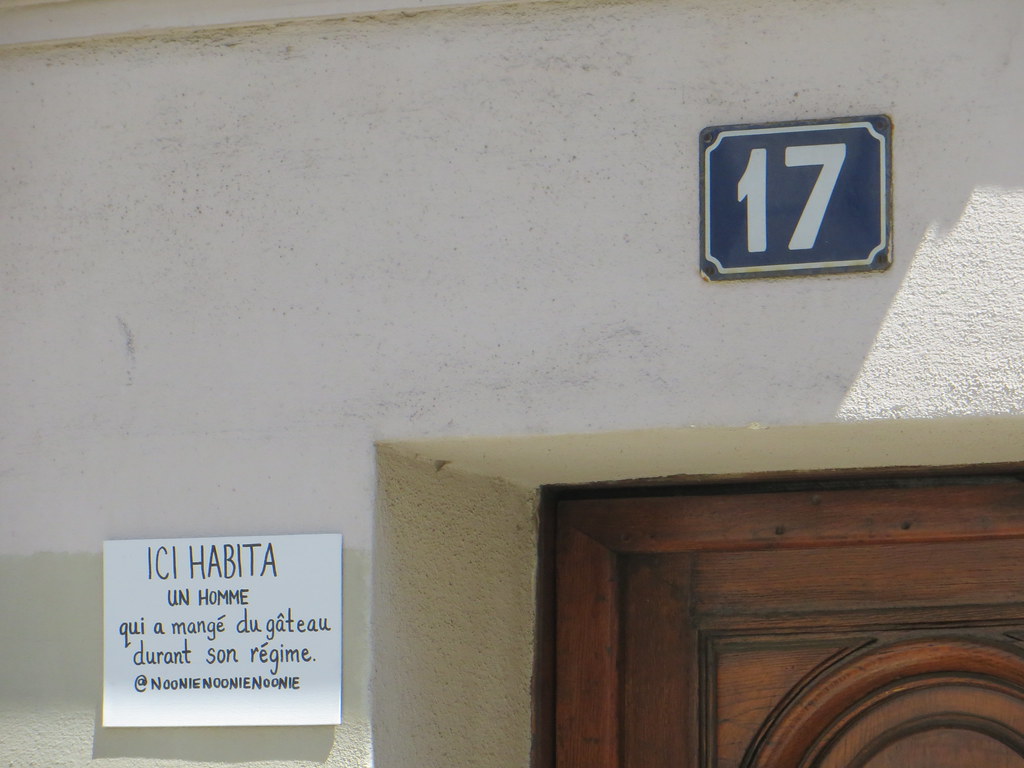 République in the rain 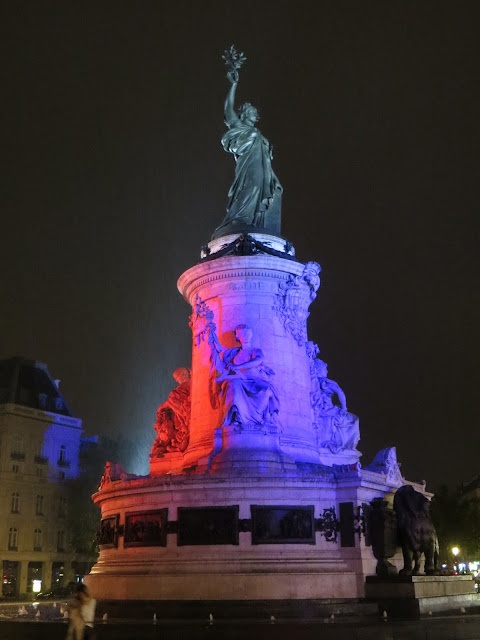 Posted by Autolycus at 06:12 No comments: 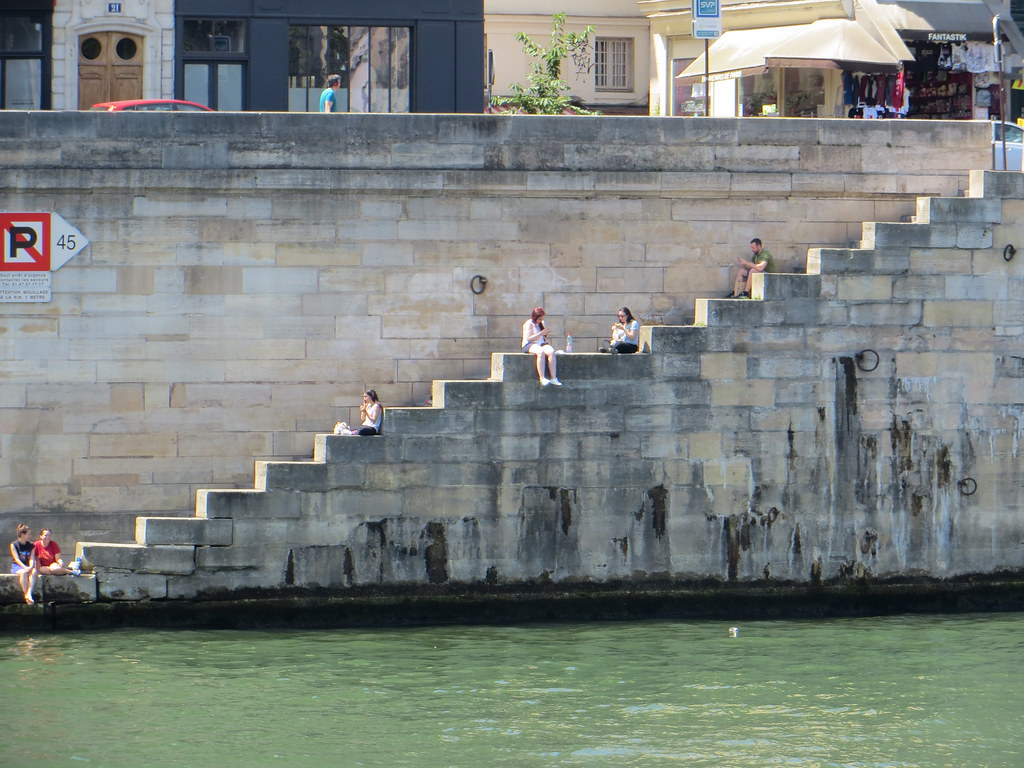 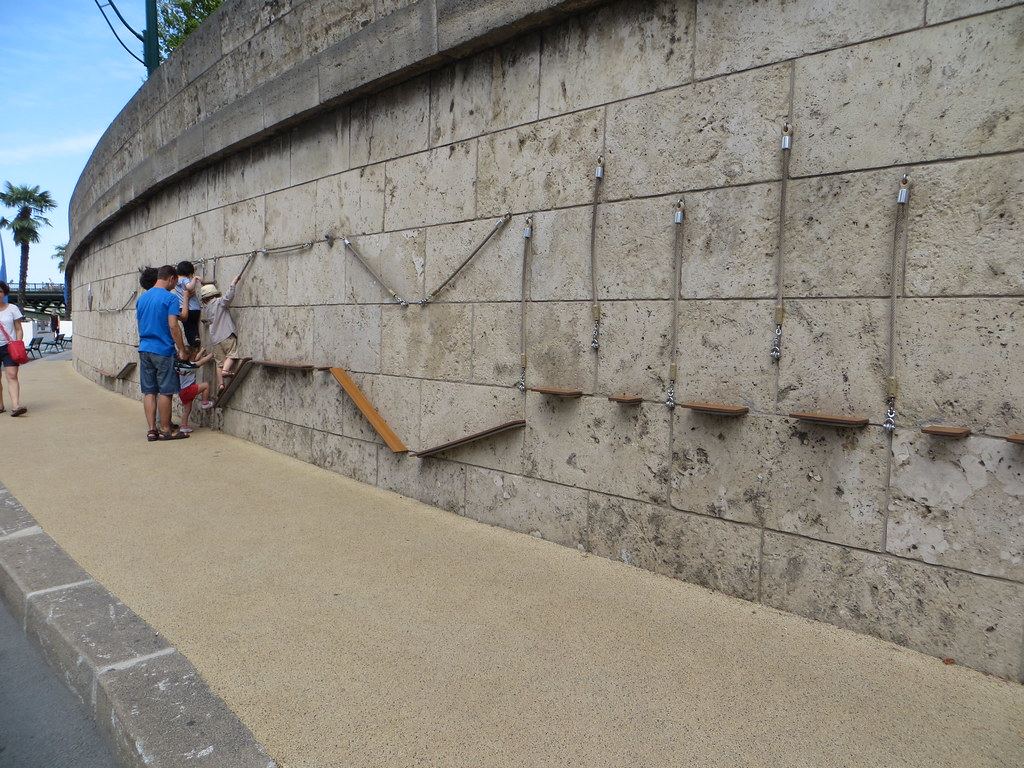 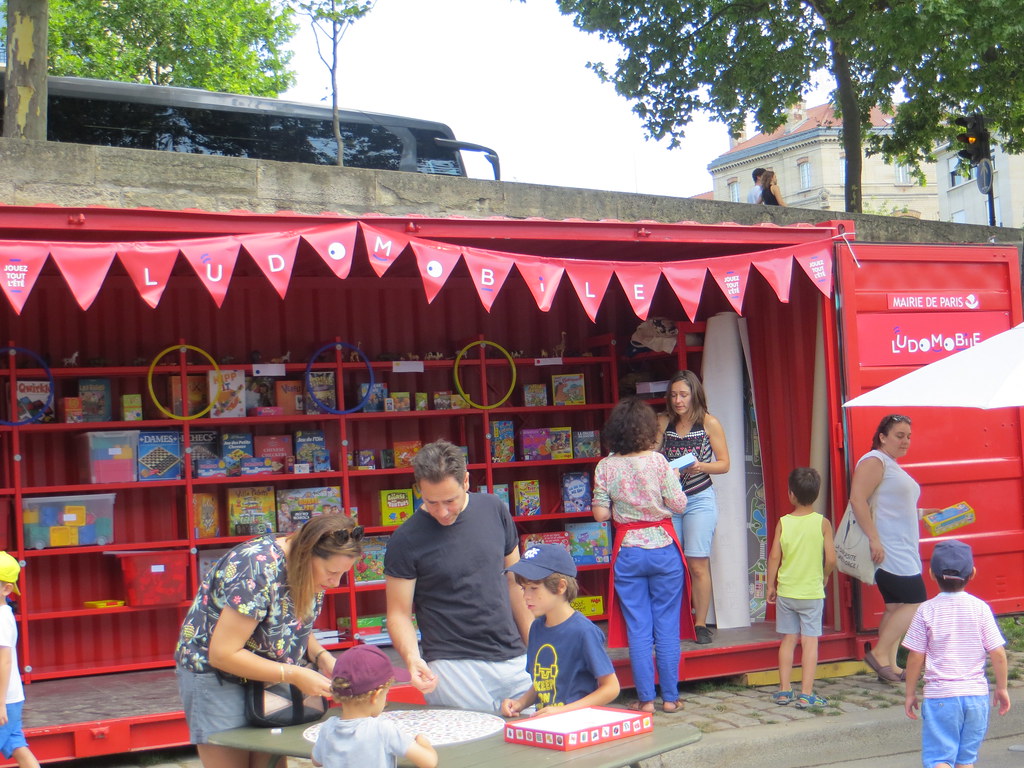 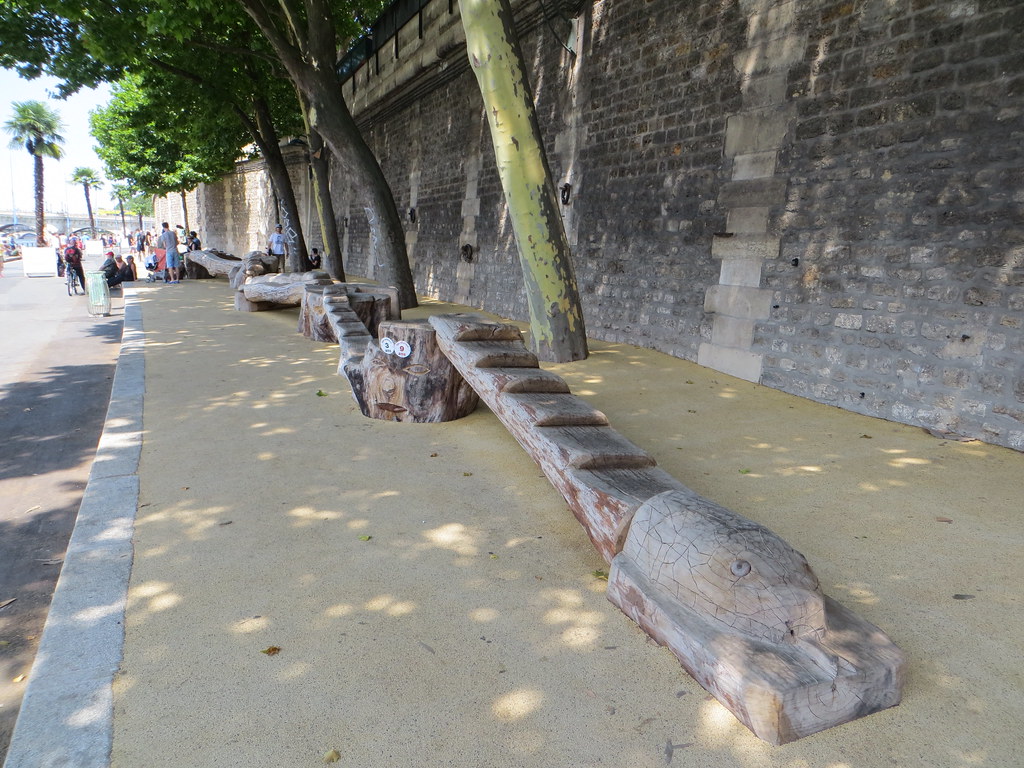 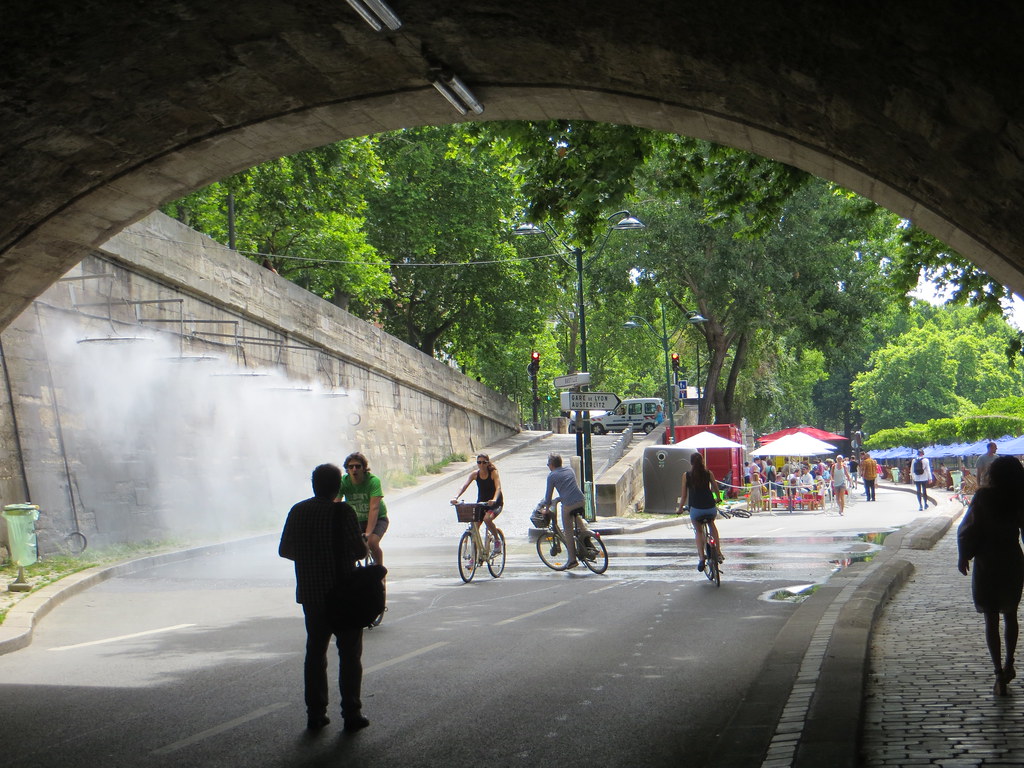 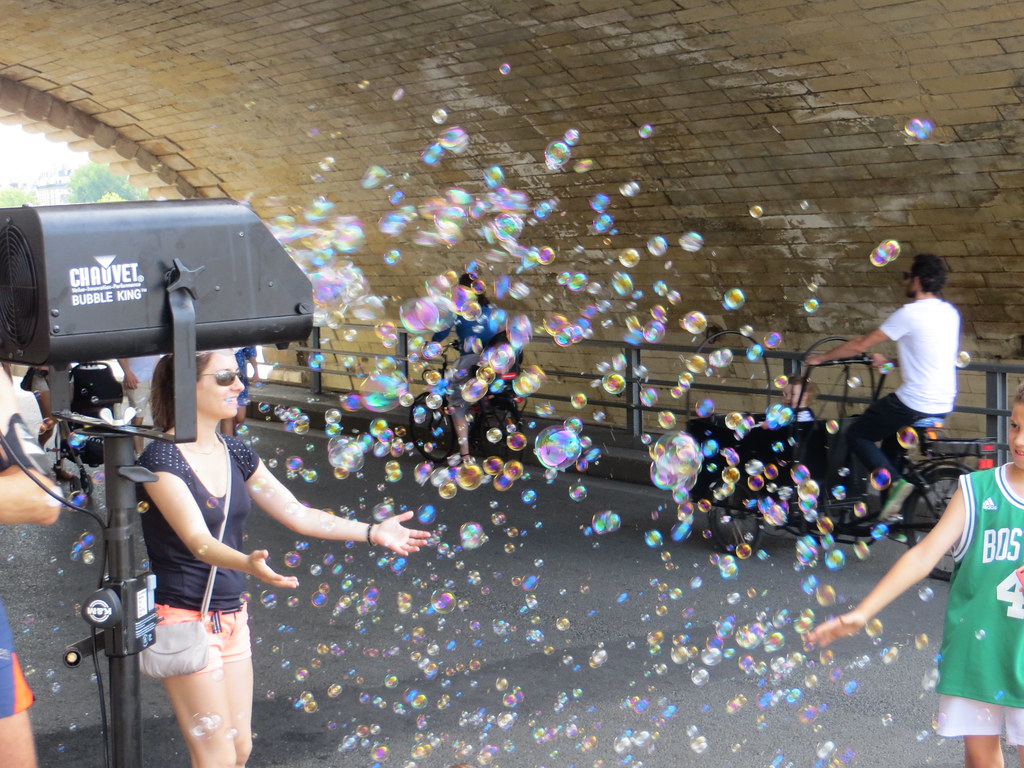 If you're selling socks...

...let the socks sell the sales: 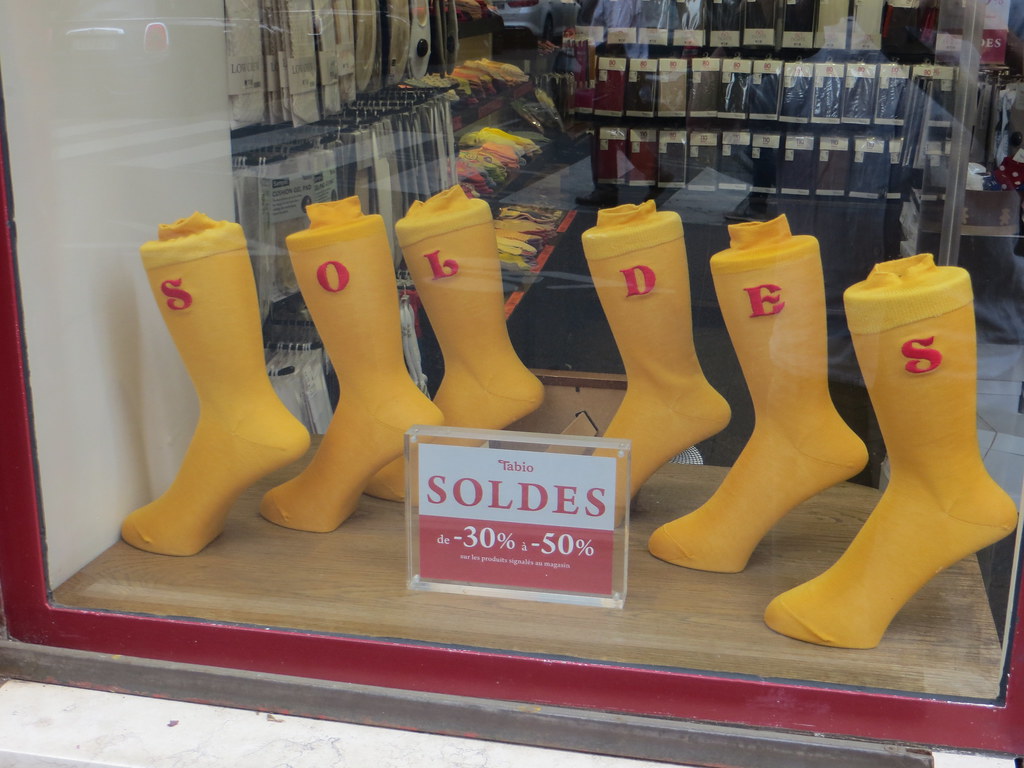 Posted by Autolycus at 07:55 No comments: 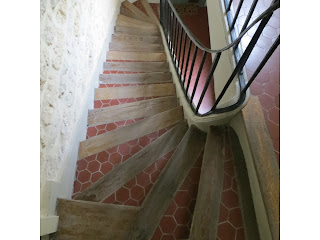 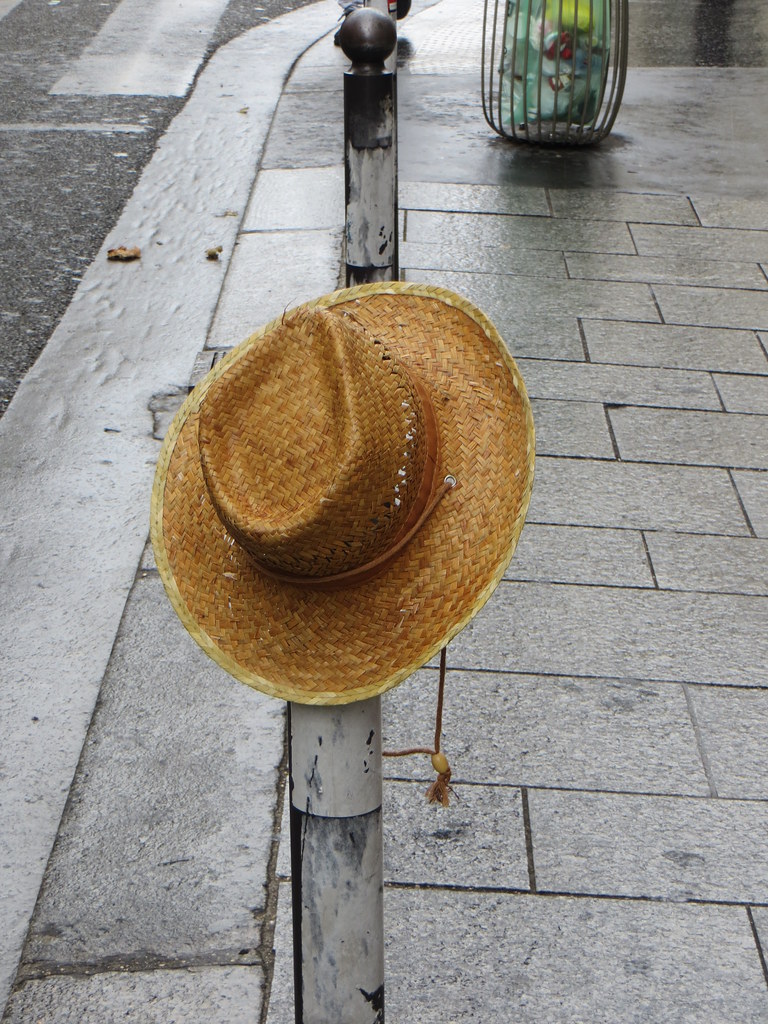 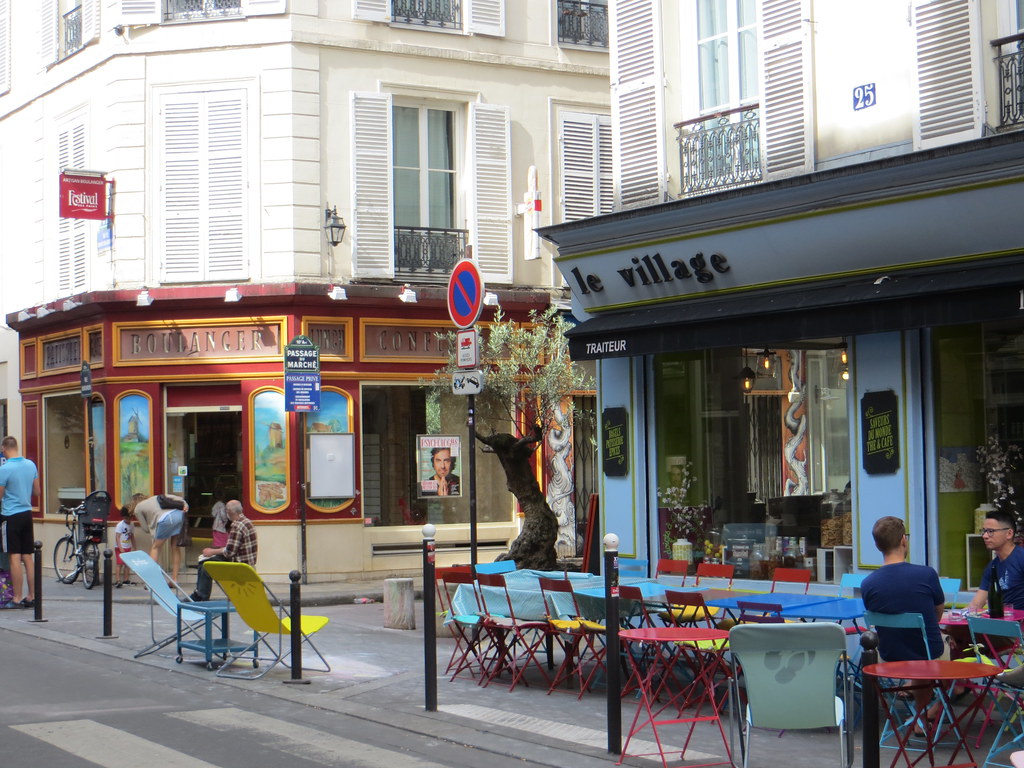 Posted by Autolycus at 10:03 No comments:


There's a lesson in here somewhere.

Arriving in a hot (33C) and humid Paris, lugging a suitcase up through a metro station with more stairs than usual and confusing signage to the exit (hence more stairs down and up again), then up three floors to the flat I've exchanged with,  doesn't help with the right frame of mind and skills to getting the key to work in a fiendish combination spring and dead-lock. Messages and phone calls backwards and forwards with my exchange partners (now on the train to London) didn't entirely help, with matters coming to a head when the spring part of the lock fought back against sweaty fingers, and the key disappeared down the gap between the door and the landing floor, and indeed irretrievably under the door.

At which point I said I'd go to a hotel, having a favourite one I've used before, and started lugging everything back to that damn metro station and down  its stairs, only to get a call to say he'd come back to Paris to sort it out for me, and in the meantime, there was a little hotel round the corner that would do for one night if necessary, or at least somewhere to store the luggage while I waited for him to get back. Which turned out to be another three floors up with the luggage in one of the saddest-looking decors imaginable  (not quite a fleapit, it looked clean enough and the people were nice enough, but Alex Polizzi would have a fit).

Eventually, the tutorial on the lock (press in against the spring before turning to release the deadlock, then press in and turn again to release the spring lock) took a good 20 minutes for me to get the knack, on top of all the time he'd spent to get back to set me right. Eventually he went off to get an evening train, and arrived in London maybe 6 or 7 hours later than he had planned. We did all at least end up for the night where we were supposed to, but it was all rather shaming.

The lesson, perhaps, is in these wise words from Miss Barrel House Annie:

Turns out this music sets the ideal rhythm for scrubbing out your grillpan (leaping around the room optional):