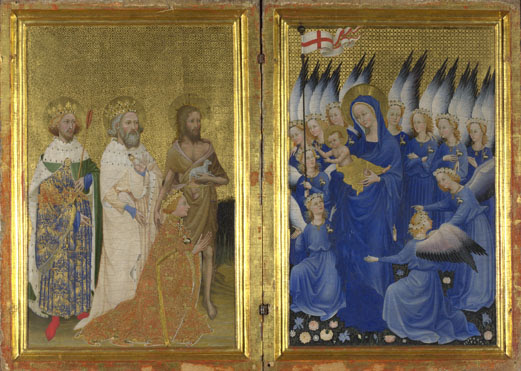 What to do with an impromptu day off? Just lazing around with the newspaper seemed too much like any weekend, so eventually I took myself into town to look at the National Gallery, where I haven't been for years. It took a TV programme to alert me to this treasure in the Gallery, the Wilton Diptych. Just another reminder of how little one takes advantage of all the things available to Londoners.

And when due respect had been paid to that, and Rembrandt and the Dutch painters, what then? I finally set about an idea I've had for some time, to get a turntable that will play 78s, with a view to digitising the shelves full of family inheritances and junkshop acquisitions from decades ago. I had it down for a retirement project, but who knows how long it will be before suitable turntables are no longer made?

So I spent most of a wet weekend getting to grips with records I'd almost forgotten about, and learning the limitations, not only of technology, but also of my patience in getting the best out of it. For some prized old recordings, I might make the effort to try to suppress the worst of the hiss and clicks (though come to think of it, the really great old performances have probably all been professionally done and put on CD years ago). For others, it seems only too appropriate to hear them as though they were ghosts dimly perceptible through the aural fog of decades. This, by the way, is from a record (possibly from 1910) of Maritana, in mid-Victorian times a hugely popular opera (be warned, I think I sense a theme coming on for future posts):

Posted by Autolycus at 11:38 No comments:

A night at the opera

It's one of those commonplaces that people who live in a city too rarely take advantage of all the things it has to offer: it's too easy to follow the same old rat-runs to and from work and the couch in front of the telly.

But on a whim, from reading a rave review, I found it took only a handful of mouse-clicks to look up availability, choose a seat and pay for it. Which is how I came to spend Thursday evening in the over-the-top gilding of the Coliseum watching a drama of love across the chasm of family feuds, marriage by trickery, madness, murder and suicide. Just like EastEnders, but with better singing.

I could quibble about some of the production details: this style of opera tends to make everything stop for the Big Numbers, so in the wedding scene, the man who knows his bride has been offered for political reasons and suspects she might not be too willing, only to find the long-disappeared rival bursting in at the crucial moment, is given next to nothing to do for quite some time (I don't think that would happen down Walford way).

It can't be easy to find a suitably non-speaking way to have everyone else make "Corblimey, whatever next?" faces and movements through ten minutes or so of arias. To cover it, the principals seemed to be doing rather too much climbing on the furniture for no apparent reason; and at one point one of them was made to do the exact opposite of what the words said.

It was also over-egging it a bit to imply that Lucia's brother had some sort of suppressed incestuous passion for her, rather than just being the standard domestic tyrant. But I did like the way they managed to suggest that both the brother and the forbidden lover were, in their own way, not much further away from impetuous adolescence than the heroine. And there was a very impressive thunderstorm.

All that said, the heart of it all was Lucia's plight, and the beautifully convincing performance by Anna Christy. You can't but be moved at how, for once, the tour de force coloratura singing actually serves the psychology of Lucia's final fantasy. Here's Natalie Dessay, one of the current stars in the role:

An email from "Mimetic Gillespie" (one of a silent order of Gillespies, I assume) offers me an "Often updated sugary original archive" - not something I encountered in my classes on records management, I have to say.

Reading (not much) further on, I discover that it is an archive of a lady from Port Stanley (who knew they could be so adventurous in the Falklands? You'd think the wind would make it inadvisable) displaying what are apparently now called (if I am to believe a rather shouty Chinese gentleman I've seen on the televisual apparatus) her "bangers".

Later in the day, there's something similar from "Objector Prescott" (surely not our former Deputy Prime Minister?!).

Cold enough to be glad there's some ironing to be done.
Posted by Autolycus at 18:05 No comments:

I've been reading through the blog of an old friend who's retired from the US to Mexico. Much of what he's experienced sounds familiar to anyone who's visited a Mediterranean country or watched one of those TV series following people who move to another country (though they seem to concentrate on people who make "good television" by being - totally the opposite of my friend - hopelessly unrealistic and unprepared). But it's always interesting to read about the cultural adaptations of such a big move.

And if I hadn't, I would never have found out about a lady who seems to be something of a Fanny Cradock of the castanets, and has managed to clack her way into decades of diva-dom.

Take it away, Sonia!

Posted by Autolycus at 11:11 No comments: 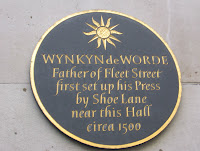 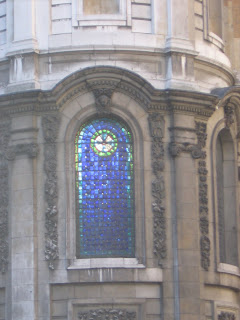 Posted by Autolycus at 09:42 No comments:

It's not about the toys, it's about the spin-off merchandising....

What a coincidence that my superficial thoughts on e-books and readers came just before the hooha about Apple's new iPad device. It all looks as slick as other Apple products, but if it is indeed the case that it won't multitask (no listening to music while you read?) it sounds like a first attempt rather than a finished product.

The meat of it seems to be not so much what the device will do as another attempt to set up a "walled garden" to supply content. On which topic, some recent goings-on at Amazon are of interest.

It all seems to add up to another good reason not to commit oneself (not that I ever need an excuse for that).
Posted by Autolycus at 13:29 No comments: