You don't have to be self-deprecating to work here.... 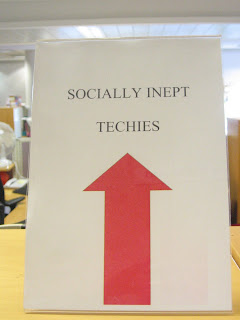 Posted by Autolycus at 13:20 No comments:

Does that mean that the French think of the world's largest online network as "Bumgoat"?
Posted by Autolycus at 19:36 No comments:

Alerted by Mizz Scarlet, I have been undergoing analysis - stylistically, that is - through this enterprising site.

Depending on which particular past posting I submit to it, I write like

Perhaps I should settle for being Walt Whitman (who, on this evidence, apparently wrote like Charles Dickens) with his grandiloquent excuse:

Fortunately, I don't think their database encompasses Enid Blyton - their analysis of an example of her oeuvre entitled Big-Hands and Nobbly is that she wrote like J. K. Rowling.
Posted by Autolycus at 13:37 No comments:

And there's me wondering...

is someone trying to make tripe look glamorous?

Posted by Autolycus at 17:47 No comments:

Circuses for not much bread

Suddenly we seem to be in the middle of festivals and other cultural events that are, happily, free.

The Greenwich and Docklands International Festival (mostly dance and performance arts) is coming to an end, though there is plenty more happening in Greenwich over the summer. On Friday, the big local (i.e., within walking distance) interest was another waterborne late night performance by Ilotopie, on Millwall Dock. Last year's spectacular, if somewhat Frenchly surreal, performance, full of grotesques, movement and fireworks, had us all agog with expectation. 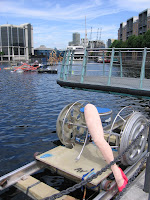 Oh dear. Some caricaturish people drifted around having animated, if silent, conversations on mobile phones. Some tall structures looking vaguely like reindeer skeletons circled around. A rocky island somehow inflated itself. A long platform hauled itself into view, along which various grotesque characters ran or wheeled themselves in various contrivances. One or two jumped into the water, for no obvious reason, while others threw various objects away (searing condemnation of our wasteful lives, no doubt). The rest began a parody of consumerist babble all together at full pelt, one breaking into assorted national anthems. There was a small amount of flame, and a lot of smoke - the wind, kindly or unkindly, blew it towards, so my perception of the action may be distorted. As far as I could make out, the platform broke up, one of the grotesques got separated from her unfeasibly large plaster legs, and most of the characters ended up in the water. A rather large metal framework expanded itself. The end.

On Saturday, central London was not quite taken over by the Pride parade and stages.

The parade was the by now almost traditional gallimaufry of the frivolous, the worthy, the commercial, exhibitionists and fun-seekers, a fair few side streets were closed to cars, and the pubs were full to bursting with the clientele taking over the streets for the afternoon.

Along Greek St, there were samba drummers, of all ages, colours and styles of hair and dress, giving their all - whether by arrangement with the businesses along there, or purely impromptu, I don't know. It was fascinating to see the way the drummers could respond instantly to the signals of the "conductor": a combination of dance moves, sign language, whistles and the gestures of a tic-tac man seemed to control precisely what instruments should play what rhythms, to the point where one conductor simply vanished behind the crowd of spectators and communicated by whistles, before making a triumphant return. And the stamina of the performers! I was there for a good half hour, they'd been going for quite some time by then, and there was every sign they were well set in to carry on for a while when I left in search of a cuppa.

Today, we have the prospect of the Model Steam Boat rally in Victoria Park. It's all go, this urban life.

Posted by Autolycus at 11:51 No comments: