Zen and the art of nothing in particular

1. Some bicycle pumps are of a design that permits the head to unscrew from the cylinder, causing them to leak air from the tube when you try to pump it up. Do not confuse this with a failure of the puncture patch in the tube, for you will get all oily changing the rear tube unnecessarily. But if you do change the tube, do make sure the puncture patch in the other tube you've been holding as a spare really has held, or you will find you are unable to pump that up at all, even after you've worked out why the pump isn't working either: then you will have to change the tube back again.

On the other hand, you will be able to reduce the time and sweary effort spent changing a tube to something more respectably efficient than hitherto.

2. Your seething discontent at the mysteriously complicated business that detains people ahead of you at the Post Office counter can be countered by the realisation that a mis-copied postcode on your parcel can cause the counter staff some tine-consuming detective work.
Posted by Autolycus at 13:50 No comments:

As I cycled home the other night (not last night, what with the rain, a failing pump and a flat tyre, and don't get me started), the robins and blackbirds along the tree-lined back streets were singing their little hearts out. It couldn't just have been the confusion of the street lights (they're a constant, after all). So it must be spring on the way.
Posted by Autolycus at 11:15 No comments:

Reading too much into it

A damp, grey day today, and a bit of a hangover from last night's party (it seems three glasses of wine need four glasses of water or more to compensate, if I'm not to keep on waking up in the night feeling wretched).

Just the day for staying in and catching up on my backlog of reading: not just the Saturday Guardian, which has returned from the Christmas break to its usual elephantiasis and so takes up the whole weekend, and sometimes more. I've bought it, so I've got to make some effort, but "1000 novels everyone must read"?! I haven't even looked at that yet. No, today I am tackling an accumulation of magazines from various organisations I've been involved with: for example, both this year's and last year's annual reports from my old college.

It's not as though I feel a great sense of connection (it was 40 years ago, after all, and I've never been good about maintaining friendships), but here they are. There's plenty of news of interesting new academic work, and glossy photos of the daily life of the place, but I've reached the age where one scours the obituaries (no, I'm not there, but since you ask, this year there is an apology for misreporting someone as dead last year). What a catalogue of success, adventure, service, commitment - and what did I do with my opportunities?

It's enough to drive one to the biscuit tin.
Posted by Autolycus at 10:50 No comments:

My thanks to Ms Scarlet for awakening me to the delights of Mrs Miller's singing. I'm surprised I hadn't heard of her before, because I'd have expected her to have quite a market in the UK of the 1960s. In classical music, we had delighted in Gerard Hoffnung's concerts, were well acquainted with PDQ Bach and Florence Foster Jenkins, and in the more popular field Jonathan and Darlene Edwards were not unknown. And after all, any sort of evidence of American over-ambition has rarely been without a welcome here.

But this incomparable diva was indeed unknown to me: my first thought was of our own dear Mrs Mills:


but a moment's listening took me inevitably to the unforgettable:

Posted by Autolycus at 13:10 No comments:

There was still light in the sky when I left work today. Only five months to go till the days start drawing in again.
Posted by Autolycus at 18:20 No comments:

I don't know what's come over me. My get up and go has got up and gone. As a fine bright Saturday clouded over and I realised I hadn't checked some opening times, my plans for a weekend outing just disappeared, and nothing sprang to mind to take its place.

Instead, I stayed in to work out ways to use up the red wine the book club had opened but not finished (red onion, tomato and red wine soup for the freezer and a sort of boeuf bourguignon, if you'd like to know).

And if you like, you can see a video of the sort of thing I got up to for half an hour behind the bike sheds with a filthy scrubber.
Posted by Autolycus at 13:24 No comments:

I see from Mrs Pouncer's recent comment that there may be some misperception about my cooking for my book club (by the way, Mrs P, where is that speech?).

We're all neighbours on the same estate and all get along like a house on fire (you understand of course that I'm breaking the first rule of Book Club, which is not to talk about...), but not only is each meeting an opportunity to check out other people's layout, furnishings and decor, it's also a hotbed of competitive snackmanship.

If one host has salt and vinegar crisps, the next has M&S parsnip chips in honey. Nuts'n'raisins are countered with salted almonds. Plain chocolate cake? The riposte is a cream-filled chocolate cake with Smarties on top, or butterfly fairy cakes with a strawberry/mascarpone topping. Pork scratchings? Forget it.

The danger is, of course, that we tend to over-provide: olives and stale Cheesy Wotsits tend to pall as a breakfast after a couple of days. This time, I got the quantities about right: and now that I've learnt not to over-cook them. I seem to have been given a commission for mini-pizzas for someone's birthday do (very simple, pizza base dough, finely-chopped and sweated shallots on a little tomato purée with an olive on top - no cheese, so I could almost be very Waitrose and call them mini-pissaladières, if that didn't sound unfortunate).

Drink is another matter. It's amazing how so many people bring a bottle and then drink tea. One always makes a profit - and many a bottle makes a tour from meeting to meeting.

What's that? Books? Well, those of us who've read the book do find a few words to say about it. But what with all the gossip on the estate - not to mention chocolate cake - somehow the evening flies by on a wave of convivial gluttony.
Posted by Autolycus at 18:10 No comments:

This being a rather pointless time of year, at work as at home (the highpoint of my news is that I have made a chocolate cake for the book club meeting tonight), I have little to offer but some thoughts on that age-old question: why did the chicken cross the road? 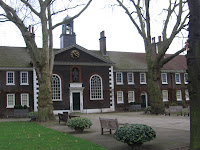 Posted by Autolycus at 19:39 No comments:

I've heard of paying through the nose, but....

[EDITED: Turns out it's illegal (although the advertisers didn't want to admit to it)]
Posted by Autolycus at 12:51 No comments:

The artifice of eternity*

Well, I've done my patriotic duty, which is to say, I've more likely done my duty by international trade, since what I've bought in the sales turns out to have been made variously in Estonia, Sri Lanka and no doubt China, and any profits likely to be returned to the US and Japan as well as the UK.

To recover from all of that, I went to the Byzantium exhibition at the Royal Academy. I have been to Istanbul, and managed to see a few traces of the Byzantine Empire there, but much of this was new to me. To think so much fragile art survives from as far back as the days of Constantine himself: there are paintings and micro-mosaics, intricately-carved ivories and even textiles. Though much of the exhibition concerns the religious art and its legacy, there are some intriguing domestic items and intricate personal jewellery that attracted a lot of envious eyes. There's a lot of material on the inheritors, most obviously the Russian Tsars, but also the Bulgar, Serb and Armenian churches (I hadn't realised quite how far the mediaeval Serbian empire extended: that explains a lot), as well as the interplay with the Catholic inheritance in Italy. Most moving of all is the final room of pieces from the St Catherine Monastery in Sinai, whose artworks were saved from religious and political change in Constantinople by - well, the Islamic conquest.

After which degree of enlightenment and elevation, I emerged to a question of etiquette. If some passer-by has chosen to leave their empty coffee-carton in your bike basket (this was outside Burlington Arcade, mind - they don't do rubbish there, so there's nothing like a refuse bin) - what do you do? Put it in the basket on the next bike along, I'm afraid.

*"The artifice of eternity" is a quote from Yeats's Sailing to Byzantium. I'm not (yet) owning up to being "A tattered coat upon a stick".
Posted by Autolycus at 11:15 No comments: