One noticeable custom in the Tirol, and for all I know elsewhere in Austria and southern Germany, is painting pictures on the otherwise plain white plaster or mortar exterior.

It may be just for decoration, or often a painting of the Madonna or saints, sometimes of some allegorical or perhaps local reference, and sometimes to announce the function of the building, as in this modern addition to a village post office.

The same wall has a much older, and much less modest announcement. A previous owner clearly wished to show how important he had become, and where that importance was derived from, in an inscription which reads:

grants to ERNST FRIEDRICH DEBER, Counsellor and Chancellor of the Weingarten Imperial Foundation, who achieved the academic degree of Licentiate in Laws from the University of Freiburg im Breisgau and thereupon entered the service of the Weingarten Monastery, where he has now occupied for 35 years the post of Counsellor and Real Chancellor, and on account of his experience of the entire Imperial Prelatic College in Swabia was accepted as Syndicus in 1720 and as such appointed as representative to the Swabian community and related himself by marriage to the ancient and noble family of Pock von und zu Arnholz,

hereditary rank of nobility with arms and the additional freedom to style himself "VON DEBERN".

Posted by Autolycus at 12:14 No comments:

Walking in mountains develops a split focus in attention, switching between the grand panoramas and detail of tiny Alpine flowers (of which more later). On thing you can't fail to notice in a grand panorama is people flinging themselves off the top of a steep slope, relying on their parachute to glide around and gently (one hopes) down to the valley floor.

Not something I'd care to do, but you have to admire the skill and grace of those who do. Not that there's much sign of that at first, with the parachutes laid out on the ground and looking like plastic litter.

Then there's the checking of the cables to make sure there are no tangles, consultations about the wind and contact with some distant control point before the take-off is cleared.

Eventually, a helter-skelter run sees the parachute pick up air, and then lift the pilot off the ground as the slope falls away beneath.

Then, they're flying way out over the valley - and in the heat that settled over Stubaital, like so much of central Europe, last week, the thermals were carrying the paragliders very high indeed. As you walk through the meadows and woods, the sun may suddenly be replaced by a shadow as one passes silently over; or you may suddenly spot one gliding through a grand vista. It's a magnificent sight - but I still wouldn't care to do it myself.

Posted by Autolycus at 16:07 No comments:

A day and a half allowed a sample of the Viktualienmarkt, some historical monuments, several samples of Augustiner, some bemusement at the folk costumes on sale, and an inspection of the Deutsches Museum. 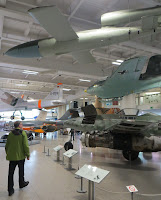 Here there were examples of all sorts of technology, from different demonstrations of the power of electricity (artificial lightning strikes, and a man hoisted aloft in a Faraday cage while being zapped with some unimaginable voltage), to engines of all sorts (sinister as well as beneficial) and a whole gallery of musical instruments (I could fancy a piano harp, but they also have the most bonkers-looking set of bagpipes).

All too soon it was time for a quick and smooth train ride to Innsbruck, a journey mildly enlivened by the volubility of a lady who found her reservation worthless in the face of the fine old art of sitzfleischreservierung (once summed up to my mother in the North of England - I'm imagining an Ena Sharples type of matriarch here - as "It's bums saves seats, not bags") - and by the sight of this inflatable leering over a fence at the passing trains, bouncing merrily in a way that not only indicated he was in use as intended, but at first glance might have got a human arrested.

Posted by Autolycus at 15:47 No comments:

Blame it on having to be up at silly o'clock for an early flight but, just for a second, I really did think the security person at Heathrow was asking if anyone's hand luggage contained any "liquids or taller trees".
Posted by Autolycus at 20:45 No comments:

Barely an hour by train from London, it only takes a few steps in the right direction from the car-park at Manningtree station to find yourself in the middle of a landscape not so far removed from those of Constable.

Once the train has gone, the only sound is birdsong, and a distant cockerel. On the telephone wires, a kestrel carefully chooses its prey.

From here it's an easy enough walk through Dedham Vale to Dedham village for lunch, passing through Flatford Mill (and its National Trust tea-garden) both going and returning.

On the way the path passes between hedgerows mostly of hawthorn and blackthorn, with here and there an oak standing proud, and wild roses in bud. Occasional  breaks in the hedge for a gate allow glimpses into the fields and then the path comes out to the valley and water-meadows of the River Stour, and you could begin to imagine yourself into the views Constable depicted.

Passing on through drifts of cow parsley and other meadow flowers, I heard a cuckoo somewhere away in the woods.

At Flatford Mill, the main buildings are in use as a field study centre, and the the all-important National Trust  gift shop and tea-garden are attached to a small exhibition on Constable in the equally small Bridge Cottage. As you cross over the bridge, you can see boats for hire and the path that wanders on towards Dedham through the vale, but my way lay up the hill.

At last, through the hedge, there's a glimpse across the vale to Dedham church and finally, at the top, classic view of the whole of the vale becomes clear:

Crossing the river once more, and passing through more overgrown paths, you eventually get to wander through buttercupped meadows, till you get another climb up the hill the other side and into Dedham. It's a very well-heeled village, with a high street colourfully painted and containing more than one gallery/antique shop/knickknackatorium. The church has an impressively old set of doors and some inventive flower arrangers (I'm wondering if there was a wedding). Further along, there are houses that look as though they belong genteelly in a Jane Austen novel.

There's a choice of routes back to Flatford Mill, through the fields of full-flowered blackthorn and hawthorn and curious sheep, and plenty of time for tea (avoiding the mischievous ducks) before strolling back to the station.

Posted by Autolycus at 15:25 No comments:

Seen from The Grapes, Limehouse, the latest in his "Another Time" series:

Posted by Autolycus at 14:01 No comments:

Now that the sun's deigning to make the occasional appearance, why not make the most of it with some bubbles?