Call me childish (if you dare), but I like sitting in front on the top deck of the bus. That way I get the best view: today, a competitive-looking cyclist stopped by a red light. Roadworks were enforcing single-lane working, so he couldn't jump the light; instead, he was twisting his body and his front wheel this way and that - anything rather than put his foot on the ground.

I know the frustration: for a London pedestrian, there's a drive to keep moving. It's not so much speed as continuity of pace; something to do with a sense of control, perhaps. I felt it too with Vélib in Paris: going along a long straight street, I'd find myself getting into a slow bicycle race with the red lights in the hope they would change before I got there (too many had an irritating habit of changing just after I'd stopped).

And it's the sense of control that sells a scheme like Vélib: you can pick a bike up and put it away without having to worry about storing or maintaining it.

The bikes are sturdy, and basic (three speeds, brakes, adjustable seat post, permanent dynamo lights, a basket, a kickstand and that's about it), but a lot of effort must go into maintenance: several times I saw inspectors going round (on Vélib bikes) with their clipboards, presumably noting any bikes that needed work (I was surprised at how few needed air in the tyres - or are they solid?). 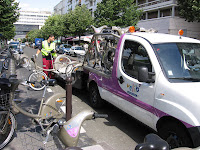 There seems to be a signalling etiquette: although you can, in office hours, call up the office from a button on the control post at a station, I rather suspect users indicate a faulty bike by lowering the seat and swivelling it round backwards - and I've seen some bikes with the tyres partially removed, which I also suspect might be a signal from the inspectors to the people who go round with the collector vans.

I've no idea about the economics of it: the pricing is designed to encourage short hops, but I regularly managed to get from the Hotel de Ville up to the Bassin de la Villette within the "free" half hour (my record was 19 minutes) - all in all, I took 46 rides in two weeks, for at most €16. I know there's some sort of commercial sponsorship, but there must be a substantial subsidy from city finances: and who knows what sort of return can be calculated in terms of car journeys or metro overcrowding foregone?

I forgot, until almost the end of my time in Paris, that one reason for trying the bikes out was to see whether it would make sense to buy a bike. Well, I'm certainly not past riding in city traffic (if I can go round the place de la Concorde on a bike, London traffic doesn't worry me), and I certainly don't need anything too fancy (maybe an extra gear or two), but it's that ability to 'park and forget' that really appealed - it's a self-powered taxi. And that's exactly what you don't get with your own bike. We've got secure storage both at home and at work: but I can't take a bike on the tube if I don't want to ride all the way, and could I be bothered with the faff of a folding bike? I have a faint echo in my mind of my mother when presented with a new ornament. She would smile sweetly as she thanked the donor for the present, but as soon as they were out of earshot, you could hear her mutter 'One more bloody thing to dust'.
Posted by Autolycus at 19:52