I'm not, by nature, particularly demonstrative. In all my time as a student in the 1960s, the only time I took part in a demonstration was an accident (I was waiting to cross the road and realised the blockage was due to a protest march about the visit of a particularly execrable politician; so I joined it). And it's taken me half a week to write up the fact that I actually joined a demonstration last Saturday (having been busy redecorating, but there's nothing interesting about the trials and tribulations of that - such as why it is that one doesn't discover the bit one's missed until after everything's put away and cleared up). 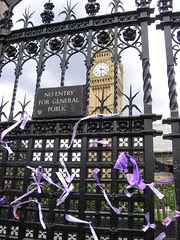 Organised by a coalition of various worthy organisations concerned with electoral and constitutional reform, Take Back Parliament has been organising a petition for a change to the voting system - the major reason why I was for quite a time an activist for the Liberal Democrats (and the Alliance before it). When I stumbled across their first demonstration last week, it seemed like yet another lost cause, given that the Conservatives were in the driving seat after the election. But in the coalition negotiations, they were induced to at least offer a referendum on a change to the Alternative Vote (a preferential voting system, but not a proportional one), so it's a live issue once again.

The problem is that our First Past the Post voting system is really designed for a two party system, when the voters no longer want one. Since the 1970s, voters have been drifting away from the two main parties, not only to other parties, but even more to not voting at all. As a result, we've now had three elections in a row in which the two main parties together got less than half the electorate out to vote for them, and the "winning" party had fewer people voting for it than didn't vote at all. This time, over a third didn't vote, less than a quarter voted Conservative, less than a fifth voted Labour and just more than a fifth voted for some other party. A tiny proportion of MPs won more than half the votes of those who did vote in their constituencies: but far too many constituencies are still considered "safe" for one party or another. The system, basically, is broken.

And this is the best chance for decades to change it: hence the excitement. 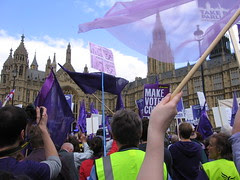 It wasn't the most revolutionary of atmospheres. There were people from Class War around the fringes, but their efforts seemed to be confined to politely asking if one would like a poster calling the new Prime Minister rude names (probably nothing he hasn't heard plenty of times before and may well hear again from his own back-benchers). Some people seemed to be there to protest that the new coalition wasn't what they'd voted for (forgetting that any reform is likely to make it impossible for anyone to get exactly what they'd voted for - nor should we if we continue to divide much as we have done). Only one speaker seemed to focus on the need for the system to be fair to voters' wishes rather than on the outcome for parties. The speeches from various luminaries were interspersed with slogan-chanting, but alongside the obvious "Fair Votes Now" and "No More Wasted Votes", proceedings were lightened by the surprising precision with which "What do we want?" was answered by "Electoral reform!" and "When do we want it?" by "Subject to referendum!" 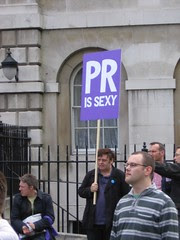 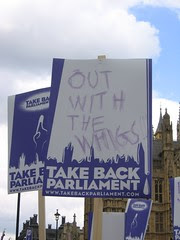 The gathering was colourful and loud enough to attract plenty of attention from both locals and tourists on passing buses.

The main business of the day was to make a mark on Parliament and then present the petition at Downing Street, so after all the speeches, the crowd moved on.

No chaining ourselves to the railings (yet?), but there was the less inconvenient tying on of ribbons and banners (which no doubt disappeared by the time the MPs actually turned up on Monday) 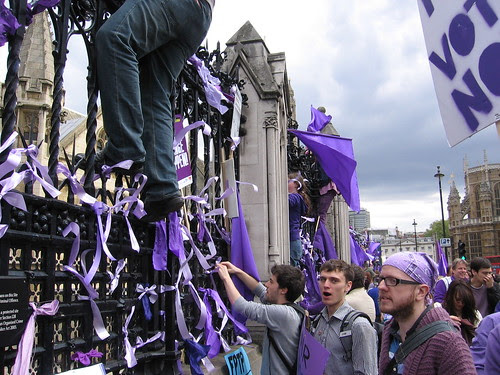 And eventually the meeting reconvened opposite Downing St (clearly we were on the late shift, as there was a collection of pro-Palestinian banners gathered up on one side), with some more sloganeering as the petition was delivered, with plenty of passing tourist cameras clicking: 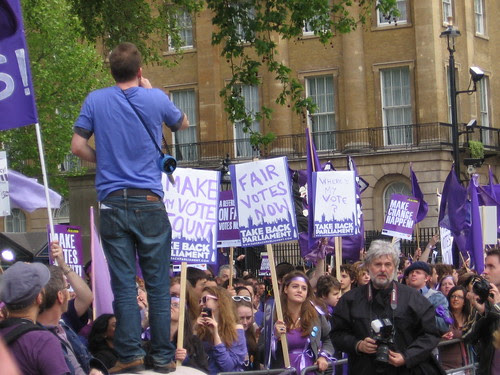