The sun came out of its recent sulk over the weekend: better get the best of it before it changed its mind, so out came the bike for a trip up to the Grapes in Limehouse.

It prides itself on being the original (more likely, one of many for a composite picture) of the Six Jolly Fellowship Porters, the riverside tavern in Dickens's Our Mutual Friend.

It is certainly an old narrow building (in Narrow Street), the bar barely the size of an ordinary room in any of its residential counterparts of the period, the bare wood of its floors and furniture suggesting no great changes in a couple of centuries (though the frosting on the front windows is evidently more 1970s than 1870s).

The walls and any available surface are covered with Victorian and Dickensian memorabilia, and light flooding through from the back invites you out on to a little deck overlooking the river, to watch the boats passing by. 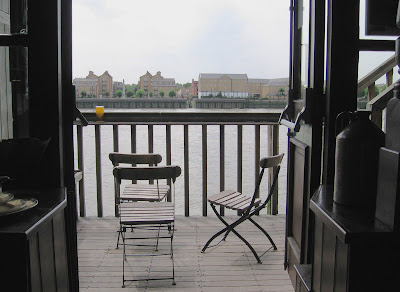 None of the skullduggery and shady business of the novel, just the usual procession of Clipper riverbuses, pleasure cruises, refuse barges - and, just at the moment, rather a lot of yachts from the Netherlands, for some reason.

After that, a gentle ride up the canal, past Mile End and Victoria Parks. This weekend, there was some municipally-sponsored fun and games in Victoria Park: Then up to Broadway Market for a cup of tea along the canal, where the graffiti seemed to become more thoughtful, the closer they were to the Alternative Central of Hackney. On a day like this, you could almost forgive them for painting over the instructions in case of emergency (though it could be frustrating, should you happen to see a heavy lorry careering up the towpath and crashing into the railway bridge):