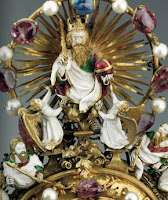 Somehow managing to avoid much of the week's excitements elsewhere in London, I've found nothing out of the ordinary on a couple of bike rides up to the West End this week - except at the end of one, at the British Museum's Treasures of Heaven exhibition. This takes the visitor through the story of devotional and votive objects from pre-Christian times to the Middle Ages, from humble lead pilgrimage tokens to the gilded and bejewelled reliquaries owned and presented by kings and aristocrats.

Whatever the miracles that might have been attributed to these objects in the past, today one wonders at the simple fact of their survival. Two votive discs with gold decoration on were displayed side by side, looking almost identical: one was dedicated to Roman divinities, the other to Christian saints - but both were of glass, and are more or less intact after two thousand years. There is a moulded glass beaker from 12th century Syria, delicate carvings in ivory, minute and intricate mosaic and enamelling - one could go on.

In this of all weeks, it isn't surprising that over the centuries many of these objects were looted and damaged (many of those on display have holes where once there were precious stones); nor to be reminded of the way relics - and their decorative containers - were acquired/expropriated/distributed as objects and symbols of power and prestige, as the Byzantine Emperors, Kings of western Europe and the Church itself contended for supremacy - the oil or aircraft carriers of the mediaeval world, perhaps.

The exhibition concludes with a reminder of the different ways in which people today feel the need to collect and display reminders of celebrities, or visit their homes, or lay objects to commemorate them at sites of mourning, and leads the visitor to exit - of course - through the gift shop for that votive postcard or pilgrim token pen, fridge magnet or tea-towel. It did occur to me that there's one modern parallel the exhibition doesn't draw attention to: is the heir to the ostentation of the gilded, enamelled, carved and bejewelled shrine or reliquary, presented to a cathedral by a king or aristocrat, the named bequest or donation to a museum?

Outside, there is a less ambitious display as part of an activity for children: paper "pilgrims" coloured and attached to a map of the major European pilgrimage routes. And above, the Lion of Knidos looks as though he could do with a miracle to cure a toothache that's lasted several thousand years. 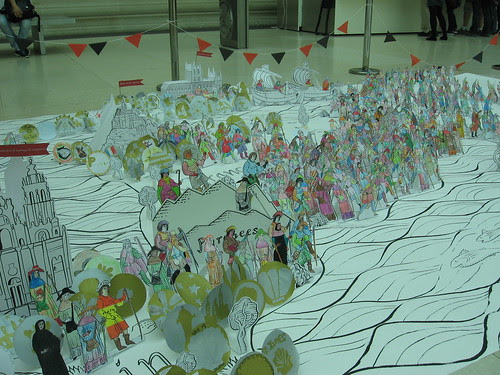 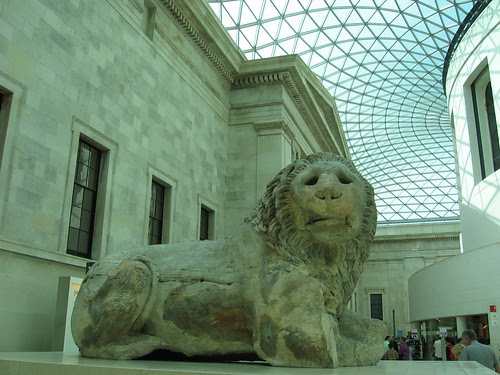