Back to the future* 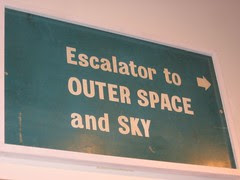 Yesterday turned out to be a good day to revisit the South Bank's commemoration of the 1951 Festival of Britain. When I went in April, not everything had got under way, but, especially this month, there's a whole series of events going on. In particular, there's a "Museum of 51" display, tucked into a side entrance of the Festival Hall, about the experience and construction of the Festival. This sign from the "Dome of Discovery" exhibition rather sums up the ambitious aspirations of the time, as did the Skylon - couldn't some sponsor be persuaded to create a modern version on the same spot? With today's technology, it could be much lighter (on both weight and illumination) and look even more spectacular. 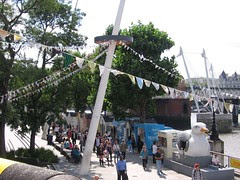 Outside, the brave attempt to evoke the seaside had attracted a fair crowd, and rather more of the beach hut artworks were open. I was particularly taken by these ideas for modern coin-operated machines, now that the Haunted House and What the Butler Saw machines would seem so old hat.

They've made a nod to the various themes of the Festival,such as the Land (a roof garden on the brutally concrete Queen Elizabeth Hall), Industry (a photographic exhibition), and Transport (some upcoming events on new developments - and a Floral Bicycle Parade later this month!); and on the theme of the future, there's quite a focus on children's and young people's art.

But overall, it feels a bit thin and hollowed out, as if all we have to show today is ideas and responses to ideas, rather than the concrete trade show aspects of the original Festival. This seems to reflect the determination of the incoming government of 1951 to remove as much as possible of the physical symbols of its predecessors' spirit: in the end, the Museum exhibition can only point to memories, the odd surviving relic and the revitalising influence of the Festival spirit on domestic design: 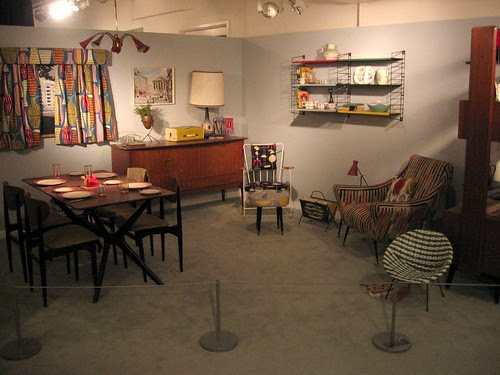 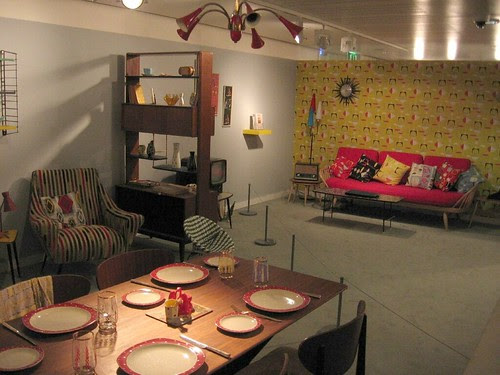 PS: Yes, I am deliberately not saying A WORD about the recent/current unpleasantness. I haven't actually seen any myself.
Posted by Autolycus at 10:03