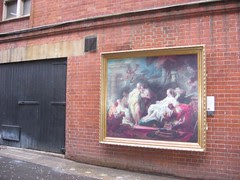 No, not the Tour de France (that's so last week). We're talking art: the National Gallery Grand Tour is a brilliant idea - full-size prints of works from the Gallery's Collection on show in the streets.

But why only the West End? If the idea is (according to their press release) "Rather than the public seeking out its art - art is seeking out its public", why does it have to aim at "interrupting [people's] everyday lives and reminding them of the treasures" only when they're "just around the corner"?

Why not all over the suburbs - especially those where most people might not think of visiting the Gallery?

And what governed the choice of locations? This image is Psyche showing her sisters her gifts from Cupid. A back alley off Leicester Square - where it's been put - brings quite other "gifts from Cupid" to mind: well, maybe it's just my mind.

Still, it's a good start: but next year - what about Whitechapel, Harlesden, Colliers Wood?
Posted by Autolycus at 19:04