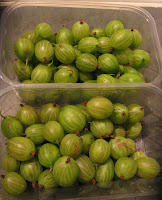 Ever since I learnt to trust the wrinkle test, I've had a yen to have another go at making gooseberry jam. They seem to have such a fleeting season in the shops, and to involve so much faff to prepare for cooking, as to make it doubtful whether there's much of a commercial future for them: so you have to grab them while you can. It doesn't help that my supermarket has only had the most perfect-looking "dessert" gooseberries in tiny punnets that work out at £12 a kilo; but I found a stock of normal ones at less than half the price. A first batch was stewed down for the freezer; one of these punnets became jam, and the other an experimental batch of chutney.

The chutney, made with brown sugar, just looks like sludge, and the recipe says to leave it to mature, so it will be three months before I can tell if the gooseberry flavour has been swamped by the vinegar and spicing. But the texture of the jam is just about right (trusting the wrinkle test worked!), the flavour has a slight prickle of ginger (from one of those Christmas presents of preserved fruits in syrup that just seem to hang around for years); and best of all is the way the colour changes from the insipid grey of stewing to the rich orangey-red of the boiled jam: 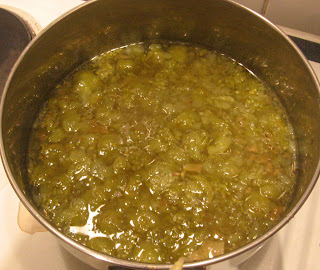 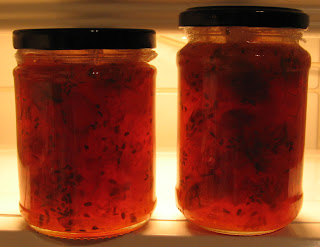