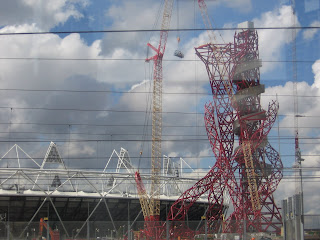 Carrying on with the "seen through windows" theme, here's a snatched shot of the Olympic Park from a DLR train. You'll see that the observation tower thing is well on its way to completion.

The official name is the ArcelorMittal Orbit. I can't imagine what, if anything, it will actually come to be known as (anything with an orbit like that in space would surely be on the way to a very bumpy re-entry). The Curly-Wurly? The Boriskelter? Sadly, it will only be possible to walk down, rather than slide on a mat: someone missed a trick there (though, come to think of it, the exit velocity from 115m up might be just a little too exhilarating).