Back from the depths: 1

Most of last week's hooha in London seemed at the time to pass us by, though after the event, it turned out there was a rather nasty attack on one particular house not too far away (rumoured to be something to do with ongoing "postcode" gang troubles) and a window was smashed in a Tesco. 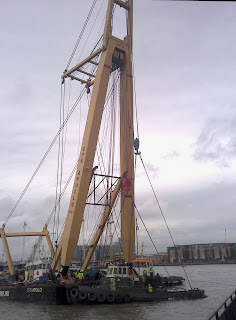 It seemed there might be something riot-related happening last Friday, in the sudden arrival of police helicopters hovering almost directly overhead for what seemed like half an hour; but it turned out that there'd been an accident on the river, with a tug somehow run over and capsized by its tow, a barge with a large crane on it. In a matter of seconds the tug had sunk, and sadly one of its crew was lost. I was reminded of the time when I was living on the other side of London, and was woken in the early hours of a Sunday morning by helicopters going backwards and forwards along the river, searching for people from the Marchioness.

Today, on my way to Greenwich, the tug was visible again, raised from the bottom by this colossal crane (presumably not the guilty party). One more reminder that Old Father Thames can be dangerous.
Posted by Autolycus at 18:10