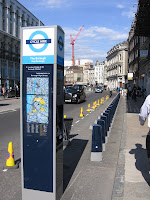 On my route to work, one of the stations for the new cycle hire scheme has appeared: a long line of docking posts, with a pillar to pay the bills through.

So far, rather like the Paris Vélib, though the technicalities have been bought in from Montreal's Bixi scheme, and the styling and visual appearance stand out rather more from the surrounding street furniture than its Parisian equivalent. 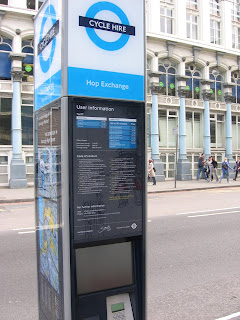 The main pillar housing the computer screen and workings is also more informative. There are local area maps for pedestrians, a highway code for cyclists (complete with a reminder to foreign visitors to ride on the left), and a full table of charges. This is a welcome difference from Vélib, where you are dependent on the functioning of the computer screens to find out how it works and how much it's costing you.

The basic pricing principle is the same, with the first half-hour ride free (albeit at £1 rather than €1 for a day's subscription). Fees for non-return and deliberate damage are set at something more like full cost - £300 - which makes sense to me, given the reported levels of non-return and misuse in Paris.

However, it's not entirely clear if any of the anonymous slots on the pillar issues printed confirmation of subscription identification, or receipts to prove you've returned a bike, as happens in the Vélib system. And what doesn't yet seem to be available (though one hopes A-Z and other providers will bring them out soon) are maps of where the stations are: to get the best value out of such a scheme, you need to know where you can return the bike before you take it out. We do know that so far they're only in the central zone 1.

The docking slot on each post is centrally placed, by contrast with the Vélib bikes, which have the substantial (and initially rather alarming) weight of the docking clip on one side of the front forks.

There's a button to press to identify a faulty bike (let's hope no malicious teenagers take to pressing the lot "for a laugh"), a perhaps rather pedantic explanation of the lights confirming the docking-in process, and a slot for a "membership key" for long-term subscribers. But there seems to be no way to link the system into the Oyster card, which seems odd (in Paris, regular users can swipe their Navigo card to pay for subscriptions and use): 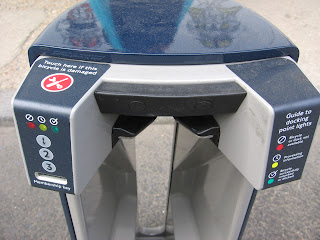