But my usual shopping trip to Canary Wharf included a diversion among all the indistinguishable shiny objects in their annual Motor Expo: Land Rovers performing gravity-defying dressage. Quite why people would want to sit in a car doing all this, rather than watch it from outside, I don't know, but they were queueing up:


And then, a gentle bike ride across London, along the river and through the parks coincided not only with a party of Horse Guards ambling back to barracks along the Mall after the Trooping the Colour parade, but also with the first arrival of some fancy-dressed cyclists for the Naked Bike Ride: 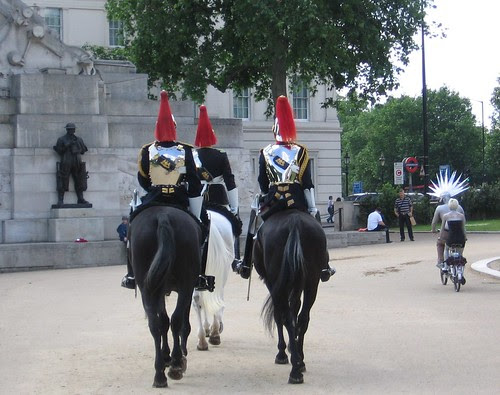 No, I didn't join in (the world isn't ready for that, nor am I); actually, nakedness wasn't that much on display at that point. On my way home later, I did see a few crinkly-bottomed old gentleman starkers around the Wellington Arch (why does that sound like a euphemism?); but mostly, there were people with various sorts of fancy dress and decorated bikes (and one young woman promoting a cycling website with the banner "Powered by cake").

I was on my way to see a different sort of decoration, in the

the Museum of Brands, Packaging and Advertising, almost hidden down a mews in Notting Hill.

It's a series of packed display cabinets taking you through products, packets, adverts and toys in their (lightly-outlined) social and political context from late Victorian times to the present day. The further away they were in time, the more outlandish they seem: Aspinall's "Neigeline", anyone? Ramsay's Spice Nuts (for eliminating all species of worms), Co-operative Liver Salt (what on earth would the unco-operative sort do?), the Bloomer Polkas. But as you move forward through time, nostalgia creeps in: the place must sometimes echo to "Ooh look, we had one of those" - there was a glove puppet of Sooty that I'm sure I had as a child. And then there are cases devoted to how individual brands have altered their appearance over time, how packaging is made and what the manufacturers (several of whom are sponsors, wouldn't you know) are doing to lessen the environmental impact.

As you might imagine, they're not short of themes for scrapbooks, postcards and souvenirs in the shop: but they also had books on how to achieve the look of different past decades, and, for the scholarly, I noticed a history of Australian apple labels (I am not making this up).
Posted by Autolycus at 09:50