London can be quite surreal at times. 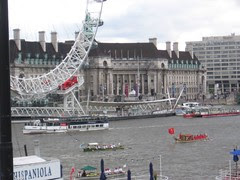 Yesterday I went to have a look at the "Tudor river pageant" (part of the commemoration of Henry VIII's accession - the bit when he was a Good Thing rather than the monster he became). Nothing too surreal there - we like a bit of re-enactment, even if the dressing-up is just a little ridiculous.

So I hung around on the Millennium Bridge (since it would be easier to run from one side to the other to take photos); eventually the procession appeared, and a burly "King Henry" bade us all a suitable stentorian "Good day" with all the flourishes.

So far, so ho-hum; but running for a bus to catch up the procession nearer Parliament, I passed a Japanese tourist hammering out (more than competently) the tango Por Una Cabeza on one of the street pianos scattered around London this weekend for our general amusement and edification.

And as the bus passed the brick and brutal balconies and walkways at the back of the City of London School, there was someone standing, surveying the street, in a Guy Fawkes mask. No-one else; no sign of any other activity: just standing there blankly as the bus swept past.

I just made it to catch the pageant passing Westminster, to the sound of boat whistles and police sirens (before my return to the normality of a Saturday date with Waitrose):