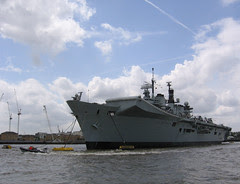 The Illustrious is still with us. Wandering around Greenwich on Saturday afternoon, I found the Navy on display in - where else - the grounds of the Old Royal Naval College, with children allowed to sit at the controls of a helicopter, suitably heroic-looking role models (though I'm not sure about having a video screen in the chest of a giant plywood Wren - and would you fancy an inflatable Marine?), and helicopters going through anti-pirate and air-sea rescue manoeuvres on the river.

And in the evening, I went to an old friend's song recital on the other side of London - it's all bread and circuses here.
Posted by Autolycus at 22:44