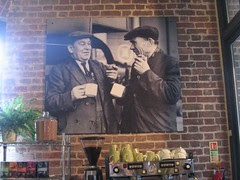 These cheery chappies preside over the café in the Museum in Docklands. It's a far cry from the "char and a wad" in their hands to the espressos and Danish pastries now on offer.

In what was once a sugar warehouse in "Blood Alley" (so called from the injuries dockers received from the raw sugar inadequately cushioned by simple sacks), the Museum in Docklands tells the story of the importance of the river and the docks to London's life and prosperity, from Roman times through to the "Warehouse of the World" in the 19th and 20th centuries. 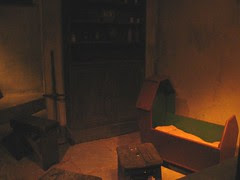 There are large and suitably Dickensian reconstructions (complete with sound-effects) of narrow alleys and their different shop-fronts and interiors. One of my great-great-grandfathers, who was a porter-labourer for wine importers near the St Katharine Docks, quite possibly lived in a room like this.

The material expands as it gets into the 19th and 20th centuries, of course. There are large sections on life and labour in the Victorian expansion (I passed on paying extra for a special exhibition on Jack the Ripper - what is this fascination with something so squalid?), the role of the river and docks in the Second World War, with much graphic detail of how the Blitz affected the East End, and ends with a canter round the decline of the 1960s and 1970s, and the debates over redevelopment since.

Both the products and the means of handling them are covered: the development of docks, bridges, tunnels, railways and warehousing, with replicas of the kind of stores used for handling and measuring tobacco and wines, a blacksmith's forge, a cooper's workshop, boxes of spices to smell, features on shipbuilding (including the works that was on the site where I live now), whaling and the never-ending battles over the regulation of trade and labour and the control of thieves and pirates.

Most striking - and sobering - is the one thing I haven't yet mentioned. This building was a sugar warehouse in the West India Docks: there's no getting round the grim fact of slavery and the slave trade, and how so much of our modern prosperity is derived from its legacy. Until recently, this was not so much in evidence in the museum. Now much detailed material has been moved into store to make space for a gallery that shows not only the shaming realities of the trade (for example, shipping lists recording the numbers of enslaved people on each ship - or often more shamingly, not even that) and conditions on the plantations (with original records), but also examples of the lives of black Londoners from the eighteenth century onwards - as well as the products of their labours and the comforts of life for those who profited.

Back in the entrance hall, there's a small - perhaps too small - shop. This coming weekend, entrance to the museum is free: and what's more, it offers its visitors a nice lie-down with their cuppa. 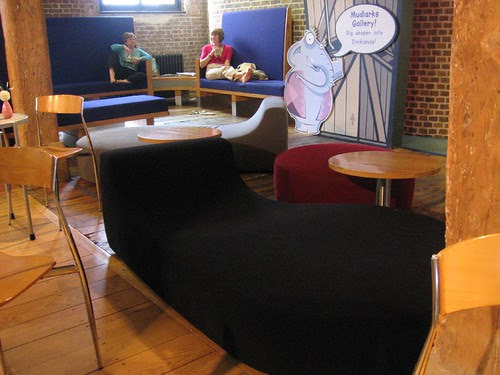