I was thinking I might not be posting much for the next couple of weeks: I'm doing a home exchange to Paris, which means I've got to get down to all those cleaning and minor repair jobs I've been putting off. It's all planned out: perhaps I'm being too fussy (I won't be looking so carefully at their place), but I'll know what I've left behind, and I'd rather have a certain peace of mind.

However, one of the put-off jobs (getting a new printer, so I can leave all my handy household hints written down) took me past the display window of the St Martin's School of Art tonight. 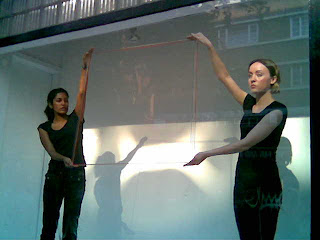 The last time I was here, there was a young woman licking chocolate off the inside of the window. Tonight, a pair of young women impassively manoeuvred three separate strands of coloured string around - not exactly cat's cradle, more a case of moving, inverting and distorting a frame. Come to think of it, the clever thing was that the tension (in the string, if not in the spectators) was never lost.
Posted by Autolycus at 19:43