I sometimes think that might have been a better title for this blog. Life in London - no doubt in any big city - is such a Dickensian succession of events and sensations. Currently, we're in the middle of a festival of architecture. Now, London has architects the way it has foxes: often a surprise, sometimes charming (some diddums cubs playing on a railway embankment), sometimes not (a desperately flapping bird dragged off into the undergrowth) - and my, can they leave a mess around.

I'm being unfair, I know, but the genius of this place is that is an undesigned mishmash: and its real life tends to happen outside those designs that have been attempted. 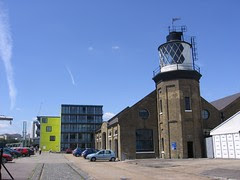 But the umbrella festival listed some events at one of our more intriguing local sights, Trinity Buoy Wharf. At the point where the River Lea enters the Thames, between industrial detritus and mudflats opposite the Dome, the Wharf was where Trinity House built navigation buoys and tested and engineered lights for lighthouses - so it has "London's only lighthouse", and a number of other surviving industrial buildings put to other uses (the English National Opera will be storing costumes and scenery here). 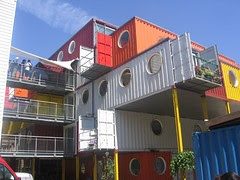 It's also famous(ish) now for "Container City" - shipping containers constructed into artists' studios (as elsewhere in London they have been converted into housing), and for an original American diner that's somehow washed up here. Some of these were open today, as were a number of exhibitions and artworks supposedly doing something related to architecture - a nice new bridge over the Lea, a tour of the Container City, and something on high rises that didn't appear to be off the ground yet.

What did intrigue me (which is an evasive way of saying I smiled but thought 'Yes, and?' - the passing show again, you see) were the things that didn't really have much to do with architecture: a machine designed to clank evocatively like dockside machinery, the longplayer, which sets the sounds of singing bowls to echo round the empty lighthouse until the end of this millennium without repeating (only another 991 years and a bit to go - or are we going to have the argument about 'year zero' again?), and a set of rotating wheels which assembled and dis-assembled a rather classical statue of a lady called Wendy:

It's only taken me three years to work out how to optimise the quality of video out of my camera and on to Youtube, but I'm so proud of doing so that I'm going to post my journey home on the Thames Clipper service as well: