Down the spiral walkway.. 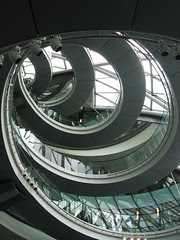 Last weekend was one of those when the public at large can see a bit more inside City Hall than we normally can. Not that there's a great deal to see - this new building doesn't have the imperial self-satisfaction of its Edwardian predecessor. Instead City Hall speaks to more modest concerns: this is not a city government responsible for everything, it's home to a mayor who's mainly responsible for appointing people to some administrative agencies, and developing London-wide policies and strategies by knocking heads together amongst all those organisations he doesn't directly control (which is most of them). It's also about transparency (so it's all glass), and a low eco-footprint. You can go into the main foyer and visit the café and any exhibitions any time, and you can sit in the public galleries for open meetings; but you can't get into the meeting/reception space at the top of the building, or walk on the building's most spectacular feature, its spiral walkway. 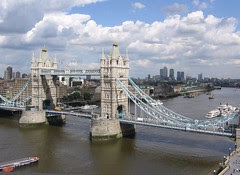 Except for two weekends a month: then you can go straight up in the lift to "London's Drawing Room" (or you could also book it for a private do - some friends of mine had their commitment ceremony there), stroll around the balcony and admire the views (well, one view really - most of the rest is rather dull stretches of south London, but you can look down on the people queueing for the Telectroscope), and then move on to what you really came for (admit it - it's all about that wonky spiral).

The architects had their eco-reasons for stepping the building off-centre as they did. It allows the walkway to curl up above the assembly meeting chamber, providing space for the hot air to rise from debate (ho-ho) to heat the building in winter and disperse in summer without air-conditioning. Or something of the sort. 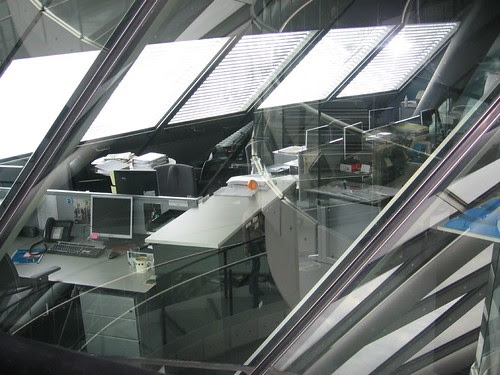 There really isn't much of note in the offices that look into (and are looked into from) the walkway (do they have a special tidy-up before the open weekends, I wonder?). No sign of Boris's new Routemaster, no plans for sacking the police commissioner, just the occasional fluffy pen-holder - and a solitary orange providing almost the only point of colour.

Once you've made your way downstairs, past the purple-carpeted chamber, there's an exhibition of ideas for the Fourth Plinth in Trafalgar Square - shortlisted artists on the main floor, school-children's (much more entertaining) ideas on the way into the café. Outside, there's a mini-amphitheatre ("the Scoop"), on this occasion offering various demonstrations of things to do with sound - but it's used for all sorts of meetings and performances, such as free movie showings.

But all that steel and glass doesn't make the building feel transparent and welcoming so much as rather strange, a science fiction set. Perhaps I should find some suitably Doctor Who music to put over this: