The London Marathon - sooner them than me

Where I live is right beside the route of the Marathon (near mile 16, if you really want to know), so it's a big event for people who live round here. For about three hours, we can't actually cross the main road, and more or less have to reconcile ourselves to being hemmed in here.

The day started fine and sunny for the wheelchair competitors and international elite runners, but by the time the fancy dress and what I've seen unkindly described as "village fete" runners got down to our part of East London, it was cold and showery (that might be rather better weather to run in than unexpected heat, of course). 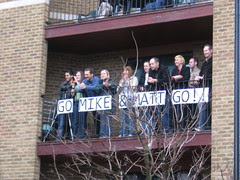 As ever, people were out in force to cheer them on, especially the whole gallimaufry of the imaginatively dressed - Paddington bears, men and women in tutus and deely-boppers, Batmen, Supermen, policemen, firemen, cavemen, Wonderwomen, Pink Panthers, fluffy bunnies, Cornish pasties, a leafy branch in the backpack - you name it, it was there.

Mind you, some people showed more enthusiasm than others: 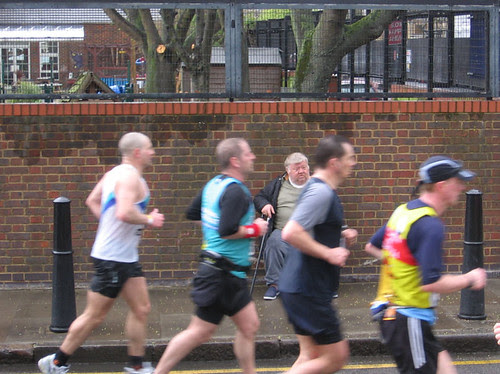 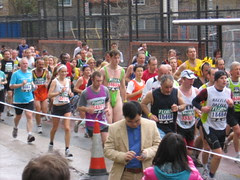 Last year, there was a woman in a cat outfit that wasn't much more than the whiskers. This year, a man in a Borat outfit - let's just say it demonstrated the effects of the weather...

By about four hours after the official start time, the runners are often mostly walkers, thinner on the ground and really starting to suffer as they battle on. It seems only right to slice up some oranges and break up a large block of chocolate to encourage them on.

By about five hours after the start, as I cross the road to go into town, the stragglers seem few and far between. One man, more or less ambling along, seemed so lost in his thoughts (or what was on his iPod) that he was quite startled when the policeman on duty said "Well done, young man!".

Here's a bit of video: