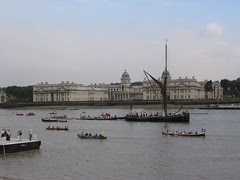 Lifeboats, longboats, pilot boats, dragon boats, gigs, wherries, skiffs, Hawaiian outriggers - any "traditional" boat may compete in the Great River Race from Richmond to Greenwichthrough central London, as long as they have a minimum of four paddles, no sliding seats, a cox and a flag of the required size (which adds that Canaletto-ish touch, especially as they arrive at the finish by the Royal Naval College).

By contrast, other long boat races seem more utilitarian. In London, the Head of the River Race (a mere 4 and a bit miles, or the Oxford/Cambridge Boat Race course in reverse) allows a bit of spectacle as nearly 400 eights arrive at Putney Bridge in a relatively short space of time; but the race fits into the annual rowing calendar as a chance for crews to evaluate their winter endurance training in preparation for summer regattas, so it usually takes place before the spring has really established itself. At the same time of year, the Devizes to Westminster canoe race takes so long (122 miles) competitors travel overnight. The Boston Marathon (31 miles from Lincoln to Boston) is, well, a little remote for a casual spectator.

But that's not to say the Great River Race is a gentle paddle. As you might expect after 22 miles, there were a good few cramps, aches and strains being massaged once the crews came ashore by the Poplar Blackwall Rowing Club: and heaven knows how many blisters.

There are competitors from far afield. By the nature of the boats, some are from the upriver Thames, many are from coastal waters (many Cornish and Welsh flags in evidence) and some from the Netherlands. There are a fair few corporately sponsored boats, and various "comedy" labels (one crew was calling itself the Discharged Seamen) and outfits (I did wonder at the commentator's description of the "pretty" flag of the Imperial German Navy, but perhaps I've read The Riddle of the Sands too often). 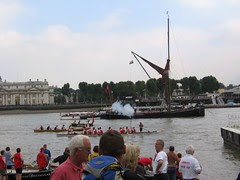 Occasionally a signal gun will mark a finish, but there seems to be no great rhyme or reason to when it's used. Otherwise it seems to be left to the crews to judge which is the finish point as they pass the barge in the river - and at least once when I was there the commentator had to tell a crew it hadn't finished yet. 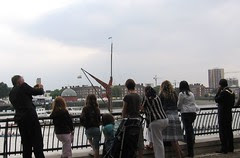 Spectators are a mixture of curious locals out to see the show, and friends and families of the competitors. As with so many rowing events, any spectator interest is in the general spectacle, which can soon pall. That's why regattas have enclosures with tea-tents (and perhaps more importantly, beer-tents). Here there's no enclosure, but the Rowing Club boathouse is a hive of activity. There is a tea-tent in the Island Gardens for the substantial bevy of be-chained mayors of the riverside boroughs. Their civic cars are lined up outside: it might be more fun if they were all rowed down in one of those elaborately-decorated barges. Some at least showed an interest in the crews coming in. 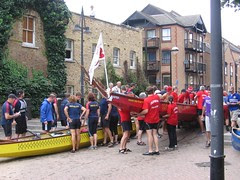 There are a few more photos on Flickr, and here's my video clip: