London Open House weekend is a chance to see what's behind the façades you see every day - grand, bland or merely mysterious. 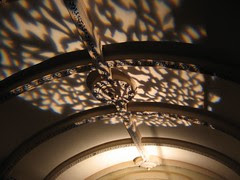 First off today was Wilton's Music Hall, like 19 Princelet St a magical shadow of its former (and this case rather raucous) glory: the song Champagne Charlie was written here, and they say up to fifteen hundred people could be there, though I don't see how. There's a small personal interest - my great-great-grandfather lived nearby in Wellclose Square in the 1830s, and he might well have known the public house that preceded the Music Hall: as someone who described himself as a "wine porter", I assume he'd have had some dealings with the Prince of Denmark, though he'd moved well away by the time the Music Hall was built.

It's a plain and simple auditorium behind a façade of terraced houses, and it feels almost domestically proportioned, comfortable and welcoming, even in its present crumbling state. Its future is still not secured. I plan to check out what a performance there is like: the next occasion is a Mozart oratorio (written when he was only eleven, for heaven's sake).

While there I noticed a leaflet for the opening of St George's German Lutheran Church nearby, so, passing up the full English breakfast in Poppies Diner on Royal Mint St (The coldest drinks in town), I went round there. 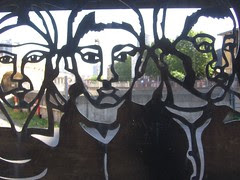 En route, I passed this evidence that it's possible to do something interesting with railings round empty land. Glancing at the estate agents' windows and the various "luxury" flat/rabbit-hutch conversions, I wondered what my great-great-grandfather and the denizens of Wilton's would have thought of the idea that Wapping would one day be one of the most expensive addresses in London, or that any part of it would attract so many of the heritage-visiting classes. 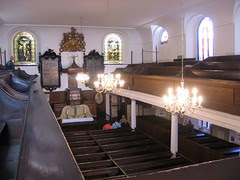 Come to that, it would have been as much of a surprise to the people who turned out in these streets to halt the Mosleyites in 1936. I was reminded of them on arrival at St George's. This fine and austere interior (complete with its 18th century box pews) received Dietrich Bonhoeffer, while he was pastor at nearby St Paul's German Church, before returning home and joining the resistance to the Nazis, for which he was executed. His church, by the way, was bombed flat in the Blitz. But it says something that the German community was able to go on worshipping at St George's, in German, throughout the Second World War. 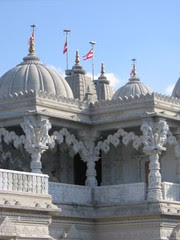 From heritage and history to anything but. The Shri Swaminarayan Temple in Neasden is barely ten years old, and the hub of a vigorous and confident community. Just count the trophies, awards and photographs of the visiting great and good in the foyer, and savour the firm reminders (in the exhibition on Hinduism) of how much of our mathematical knowledge comes from ancient India.

You approach along a particularly noisy and depressing stretch of the North Circular and eventually turn up an ordinary suburban traffic rat-run. And then, around a bend, there suddenly appears from behind the semi-detached houses a confection of white marble towers, tipped with gold and topped with flags. 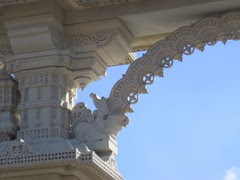 Closer to, you can see the extraordinary intricacy of the carved marble. It's like this everywhere, inside and out, in the woodwork and the stonework. Photography is (politely) limited to the exterior, so you'll have to take my word for it.

Sadly, there's airport-style security on the way in. But once you've stowed your shoes, you can appreciate the airy foyer, with two double-storey atria, lit from skylights and looked on by the windows of upper rooms, with false balconies and supporting pillars. Every part of the surface is covered with carved wood. Miniatures of Ganesh the elephant god, flowers and leaves and I don't know what. A rather stern-looking man directed visitors into the exhibition on Hinduism (and the Shri Swaminarayan movement in particular); Swaminarayan was a guru from around 200 years ago, whose followers are now widespread and clearly very active around the world (there's a school over the road). Upstairs is the Mandir or prayer room. Here all is white marble, in the same intricate carving of pillars and ceiling, leading into a domed space lit by a clerestory; it's not quite as silent as the warning signs would like it to be. To one side is a door opening on the ceremonial staircase, roped off on this occasion to make a terrace, from which there's a fine view of those other temples to modern British forms of worship - IKEA and Wembley Stadium.

The detail of the decoration and the style of architecture reminded me of Moorish buildings in Spain or Mogul palaces and (dare I say it) mosques I'd seen in Lahore, though they wouldn't allow the representation of idols. I couldn't help feeling the contrast between the exuberance of the decoration and the selflessness emphasised in the exhibition. But then, I've often felt that in the more Baroque Catholic churches. And the shop reminded me of them too: burnished domestic shrines in various sizes (£75, £90, £120), and figures of gods in various rather bright shades of plastic, and all sizes, from pocket size at pocket-money prices up to rather jolly music-playing Ganeshes and Hanuman (the monkey-god) in both contemplative and warrior-like poses at £35+.
Posted by Autolycus at 19:42