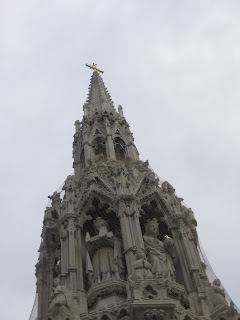 Well, I don't know that she was, but Eleanor of Castile inspired one of the more romantic mediaeval acts of love.

Passing through Charing Cross, I noticed that the huge stone cross in the forecourt has been restored and cleaned up. It's a Victorian reinvention of the memorial cross put up by King Edward I to Eleanor of Castile, his wife. She died near Lincoln in 1290, and her body was brought back to London; everywhere the cortège rested for the night, Edward had a memorial cross built. The last night before her interment in Westminster Abbey was reputedly spent just here.

The romance of it seems all the more remarkable, bearing in mind that in those days royal marriages were about dynastic business and strategic relationships; and Edward himself was one of the grimmer examples of a warrior king, known as "Hammer of the Scots", and conqueror of the last native Welsh princes, famously tricking the Welsh nobles into accepting his infant son as Prince of Wales (because they said they would only accept one who spoke no English).

The original mediaeval cross was removed in the iconoclasms of the Civil War in the 17th century, and not replaced until the railway company commissioned something grand to mark their new station in 1865. And now the grime and decay of the industrial era has been scraped away, and graceful and delicate details can be seen once more - if you dodge the circling taxis, that is. 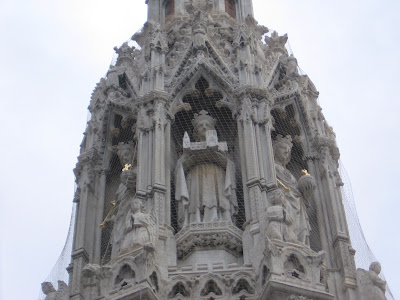