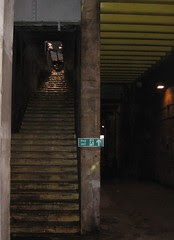 Not the most likely venue for an artwork, you might think; one of London's little seen spaces, the old Kingsway tram tunnel. Here, once upon a time, trams rattled between the Embankment and the top of Kingsway.

Ever since the trams were withdrawn in 1952, the space has been closed off to the public, part used for an underpass for cars, part set up for a control room for emergencies like the Great London Flood that we're still waiting for, part leading to mysterious offices for "other government functions". Of the rest, what isn't simply used for storing stuff has served for film sets, but most of us only know of the tunnel by reputation and odd glimpses through littered gratings and over the walls of the old entrance way.

So there's been a lot of interest in the opportunity to see it offered by Conrad Shawcross's Chord, an installation that takes advantage of the long straight tunnel.

Entering down the surprisingly steep slope (imagine how the tram wheels must have squealed as they strained their way up), I was struck by the height and angularity of the tunnel. This isn't a tube, it's a straight cut down, made all the deeper for double-decker trams. We were ushered past still-surviving elements of the old tramway station: a narrow central platform and the kind of steep stairs that wouldn't pass a health and safety inspection nowadays, but the torn, stained and flapping station signs and maps on the wall are simply film props.

Skirting puddles and cables, we went on into the gloom, and came to two large contraptions, a good 4-5 metres high, set on a rack-and-pinion rail track. Three arms, each with three branches, and each of these with three sets of six spools of thick thread, each of a different colour (but related to the other five in the set). All these elements rotate independently, driven by intricate cogs from a single, modestly small, motor on each machine. Starting 10 metres apart, the machines move slowly apart, making a rope at a rate of 5cm an hour. After three days, the machines move back together and the process starts again.

Though the classically-minded might think of Ariadne, she made her thread at home (sensible girl) and for a labyrinth, not a straight tunnel. But here the floodlighting from the sides, keeping pace with the machines and the rope as they move, accentuated the gloom on the farther side. One might fancy that anything could be lurking in the dark, beyond the heaps of indeterminate shapes and the mysterious closed-off world of troglodytic securocrats. Appropriately perhaps, the machines let out an eery wail, like a modern jazz trumpet in a film noir soundtrack - or the squeal of a ghost tram grinding around a curve.

The enthusiasts for forgotten heritage, weeping concrete and the like had been flashing away with the cameras; we were asked not to photograph the artwork, but this doesn't seem to have been a universal rule, so you can get a better idea from these photos, or these. 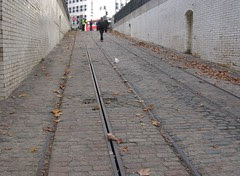 It takes less than half an hour, it seems, to contemplate the interchangeability and limitations of time and space; all too soon, we were being ushered up the surprisingly steep slope back to the street (imagine the noise of trams labouring up this!).

One last fact: when I asked the guide what the material for the rope was, he said the only material available in a sufficient range of colours for all those spools was "anorak cord".
Posted by Autolycus at 19:00