A grand night out

I do seem to have been in a spendy mood this week. I broke the habit of a lifetime and booked (shock!) to go out of an evening (horror!).

Suddenly realising that this was the last week of the Proms and that I hadn't been in person for decades, I had a look to see what was still available, and surprisingly, there were seats. Of course, if you've the time and stamina to queue, you can get into the standing places in the arena and topmost gallery quite cheaply, but for me it's enough of an adventure to get myself there at all. Best of all, there were still reasonably-priced seats for the Beethoven Choral Symphony, one of the traditional regulars of the Proms: and my seat was beside the organ, facing the conductor across the choir and orchestra. 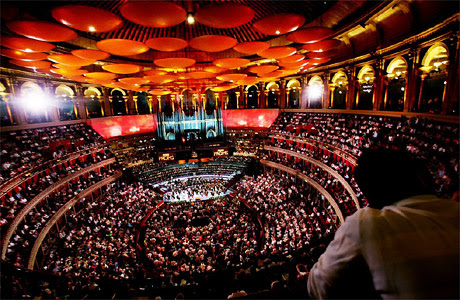 The Albert Hall is a grand amphitheatre in red and gold; it can hold 5500 people, but my first thought was how intimate it can feel, with the arena audience and many of those seated being very close to the performers. Hence, no doubt, the proprietorial nature of the traditional prommer, those people who regularly queue for the standing places and maintain the rituals of decades, chanting messages from arena to gallery, shouting "heave" when the piano lid goes up, and all the nonsense of the Last Night: but of course, rapt and knowledgeable silence while the music is playing, and usually a generous response - if they liked the performance, they let you know.

The size of the audience has to be taken into account if you visit, by the way: 5500 people, with the lights and all the exertions on the stage, generate a lot of heat, and it rises. The Proms take place over the summer, and even in one as dull as this has been, it can become quite clammy down on the ground, and more and more unpleasant in the higher tiers and the gallery. It's a Victorian building without air-conditioning. A practical top tip is to go to the loo at the start of the interval: there might not be time if you wait till after your ice-cream.

Being at a live performance allows you to hear a lot more detail in the range of both pitch and volume than you get from hearing (considerately-played) broadcasts or recordings at home. My seat gave me a slightly unbalanced sounds, being right behind the brass and percussion (it felt almost like an open-air acoustic), but there was so much more to hear than I'd ever really been aware of before.

It also gave me a performer's view - the screens at the front of the stage to let the soloists see the conductor (who would be behind them), just how many hammers the tympanist had to choose from, and some sort of electronic device on his music stand (a decibel meter?) and the extraordinary self-devised notation for the equally extraordinary Penderecki piece (exactly what people think of as modern classical music, strange slidings, swoopings, tapping, slapping and plucking in no conventional time pattern: the sort of thing that sets the mood for in a sci-fi horror film, but it seemed to fit in the context of this programme).

I could also, of course, see what the choir and orchestra see of the conductor.

By chance, the scheduled programmes and the recordings I've been catching up on have been Beethoven-heavy, and it had struck me just how playful Beethoven is with rhythm, and how much all the different conductors were letting the music dance. Tonight, we certainly got dancing, on the podium as much as in the music.

Noseda had a gesture and a move for every mood and detail he was trying to evoke: stern, dreamy, nonchalant, decisive, precise, straining, imploring, a hand outstretched at thigh-level as though supporting the sound, a chop or a double-handed backhand or a thumb-to-index circle indicating the degree of emphasis he wanted from a section, sometimes the fingertips crumbling pastry or spinning threads in the air, sometimes seeming to shoo invisible pigeons away, his shoulders raised and his feet moving as though through treacle, or arms raised and hands floating, his feet almost on tiptoe as he swayed the rhythm. And all at a take-no-prisoners tempo. No wonder he looked exhausted at the end.

That's not to everyone's taste (though the audience can't see most of it); there's as much to admire in the way, for example, Colin Davis just stood back at moments, stopped even beating time and let the Gustav Mahler Youth Orchestra play Sibelius); but this was a fabulous performance with the customary response, and special cheers (three separate calls) for the choir. "Roar of applause" wasn't just a cliché in this case.

As I came out, Prince Albert was glittering in his floodlit memorial. He might have been surprised to see just how much good has been done from the profits of his Great Exhibition, perhaps that the Hall is not only still standing but thriving - Sunday jazz brunches and all, and perhaps shocked by some of the music; but, musically capable as he was said to be, I think he would have approved.
Posted by Autolycus at 17:51