What did the trees say? 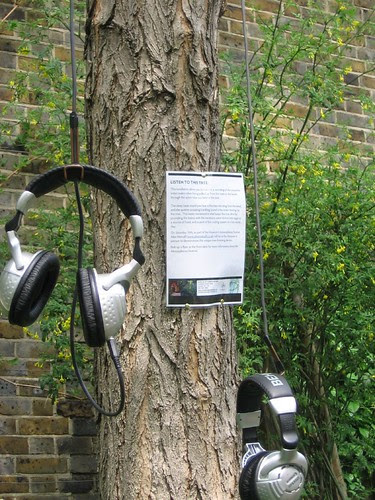 I misunderstood about listening to trees (now there's an opening line) - the installation is there all this weekend, so I went to the Museum of Garden History to hear it today.

Is there a particularly English attitude to trees? Attaching a mystical significance to forests and trees must be part of many different cultures, but it's hard to imagine a TV series called Meetings with Remarkable Trees anywhere else. But whatever emotional impact trees may have on us, I don't think we would expect sparkling repartee from them. And so it proved: what you hear is a low rumbling, like an irregular heartbeat or distant thunder, overlaid with a faint high-pitched crackling or ticking sound. The first is the sound of the internal strains in the tree as it moves with the wind; the second is the sound of water passing from cell to cell as it rises up the tree.

It's a reminder, in this instant makeover world, that trees and plants aren't just objects to be designed with, their life is on a different plane and timescale from ours.

The Museum itself is only a couple of bus stops away from Waterloo (or a walk past St Thomas's Hospital and through Archbishop's Park) in the former church of St Mary-at-Lambeth, nestled into the walls of Lambeth Palace, and home to the tombs of a number of Archbishops, as well as Captain Bligh (of the Bounty), as well as sundry memorial stones, including this one demonstrating the limits to eighteenth-century charity. Its connection to garden history is that the Tradescants, father and son, were buried there - great collectors whose name was given to various plants. 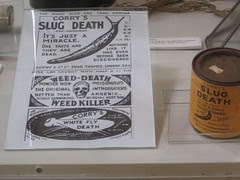 It's volunteer-run: you could tell from the slightly apologetic way the voluntary donation is asked for as you enter (£3 is hardly going to break the bank), and the slightly worn static panels that take you on a quick canter through the social and cultural significance of different styles of gardening from the Romans to the late Victorians. No-one seemed to mind the children scampering around and enjoying the church's echo. There were quiet marital disagreements over the plants for sale (I'm not sure if this is a regular thing or just because this was their open day for the National Garden Scheme).

There are display cases about great plant collectors and gardeners (the Tradescants, of course, Dampier, Banks, Paxton, Jekyll) as well as a selection of gardening tools and impedimenta, a strange plant called a vegetable lamb, and an "auricula theatre" - one of the more bizarre Victorian tastes, in my view. 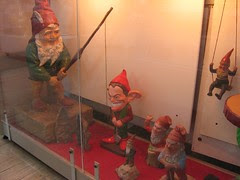 It's a quirky , rather than comprehensive, collection, and the art and events it hosts look rather similar: talks on Guerrilla Gardening, alternative music, that sort of thing.

The churchyard contains a knot garden (complete with a panel explaining the problems their box hedges have had with an amorous fox - apparently box, to a fox, is like catnip to a, well, cat), and some panels explaining some principles like planting for the immediate environment, or for wildlife, and so on. But the Museum is not resourced to be like Wisley or Kew.

It has (of course) a café and bookshop. I bought Robert Macfarlane's Wild Places, all about mountains, cliffs, remote islands and more trees: just the thing to read while tucked up in bed with a cup of cocoa.
Posted by Autolycus at 20:43