Oh, how promptly and obediently we stuck on the coloured patches our guide gave us to wear. And oh, how the irony of it completely passed her by. Posted by Autolycus at 16:38 No comments: *This is a rhetorical question. There is a cat. There is food. What - by one letter - is the most economical response?
Posted by Autolycus at 17:21 No comments:

Spotted en route to Stansted Airport and the delights of Ryanair (no, there were some things I didn't have to pay for, I made sure I went before I got on the plane):

A truck advertising 'End of Life Vehicle Specialists' - not, I suspect, hearse suppliers, but scrap dealers.
Posted by Autolycus at 16:42 No comments:

Just to get you in the mood, here are some lovely ladies knocking out (literally) some seasonal music:

Posted by Autolycus at 11:27 No comments:

These last few days before Christmas are eerily quiet in the office - a bare handful of people under the ever-so-slightly-overplanned ranks of our Space Invader decorations, and round the corner even fewer under our neighbours' efforts (they tried to compete, but it has to be said, Christmas spirit notwithstanding, that it looks like an explosion in a pound shop).

No more tea-point two-step, for these few days. Long years ago, some genius decided a building full of civil servants would need no more than two tiny spaces per floor, each of which might just about pass muster for a one-bedroom flat for those of modest income. As a result, gasp as one might, making a cuppa usually necessitates a polite wait while strangers from other sections exchange mysterious gossip and air incomprehensible grievances, and then a polite excuse-me and might-I-just of manoeuvres between the boiler, the sink and the fridge. Not today.

It's all the quieter because of the snow, the worst effects of which don't seem to have had any effect where I live, but to the south and east of London, people were taking three hours to get home last night, it seems. Less than ten days ago, I was still not using my winter outerwear, the encircling gloom not being that cold.

But with the snow, the Christmas season is at last (and somehow rather late, by comparison with previous years) perceptible; it seemed only appropriate to seek out the seasonal photo-opportunity I missed last year (you may attribute the camera movement to seasonal shivers):

Posted by Autolycus at 19:59 No comments:

Waitrose had a reduction on packs of Green and Black's chocolate yesterday. I thought it might be something to keep me going until Christmas. Won't last till Monday at this rate....
Posted by Autolycus at 09:52 No comments:

I've never been particularly interested in shoes: all they need to be is comfortable and long-lasting. I usually have a couple of pairs of black and a couple of pairs of brown shoes, in different styles, and wear each pair on alternate days. I only mention this because today, on picking up the waiting pair of black shoes so neatly (for once) aligned in the corner, I realised I must have spent yesterday wearing the left of one style and the right of another.

On a seasonal note, one advantage of the colder weather is that, on a crowded tube train, people are so much better padded and less sharp-elbowed. It's like being gently (but firmly) swaddled in a constricting maze of pillows.
Posted by Autolycus at 11:12 No comments:

We do occasionally do some work as well. 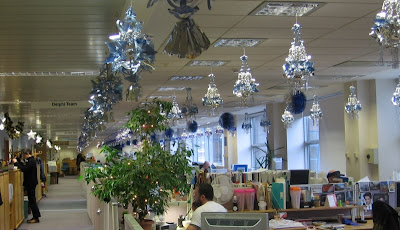