What I did not on my holidays 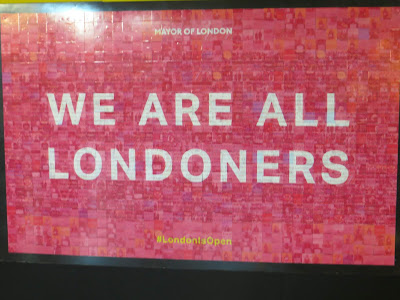 In between trips to the Continent, I needed to fit in some shifts as a volunteer London Ambassador - those people in strikingly stand-out pink shirts at various key points handing out maps, giving travel directions and answering (or trying to) assorted questions about London. In hindsight I kicked myself for not having done it at the time of the 2012 Olympics, since I spend some of my spare time doing just that sort of thing on internet messageboards - and why not do it for real? It's a way of making sure to get out of the house and actually talk to people, after all.

Perhaps 2012 was too soon after retirement to think of taking on new work-type commitments - but subsequently, either they weren't recruiting any more people to the scheme until this year, or I didn't see the announcements in time. But this year, I duly ended up accepted, briefed and kitted out (two shirts, hat, fleece waistcoat, a very handy fleece-lined rainproof and a backpack), and needing to squeeze the minimum number of shifts into the end of July and early August. It turned out you have to be quick off the mark to book in, as the locations closest to me had already been filled by the time I got round to it.

Not that Piccadilly Circus and Parliament Square are hard to get to, nor, as it turned out, was it that demanding an exercise - my first day was the hottest day of the year, and even for that we all seemed to manage OK (slightly dispiriting, though, that so many people thought we were trying to sell them something, but that's central London in the height of the tourist season, I suppose). There were enough people on each team to cover for each other, and all the support materials were well thought out (though it seems as though there's some sort of rule that the wheels on things like their information stands or "pods", just like supermarket trolleys, must have a mind of their own as to where they will go, which added a certain excitement to pushing them up or down any sort of slope to and from their storage spots). Not that there wasn't the odd unexpected question: any camera repair shop near Parliament Square? Are there any, anywhere, nowadays? All things considered, it was actually quite invigorating, even - or especially - on the day when the weather changed and gusts of wind and rain threatened to play havoc with the maps. 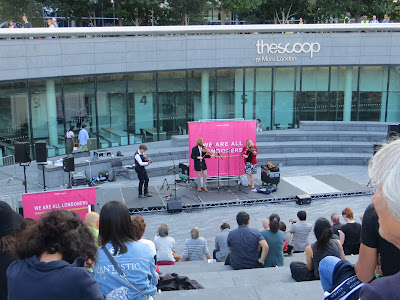 This weekend there was another opportunity, to do some ushering/doorkeeping/general dogsbodying for a special event at City Hall for EU residents in London.

It turned out to attract even nore people than they expected, and I believe they even had to shut the doors early.  The offer of free legal advice on the complexities of the government's post-Brexit settled status scheme (say no more) had most to do with that, no doubt.

But there were also some social and fun activities alongside, including concerts outside - and "crazy football" (something to do with the fact that London - or at least Wembley Stadium - is hosting parts, including the final, of the European Championship next year, though presumably not to these rules):