Mentioning the security checks on visiting the Reichstag reminded me I have rather a lot of old photographs of Berlin.

Below, for example, are two images taken from the rear exit to the Reichstag building, on the left from a cold November 1988, with the Wall snaking its way between the Reichstag and the East German government buildings, and on the right the same view in the summer of 1992, with no Wall and only a snaking line of tourist buses in front of the Brandenburg Gate: 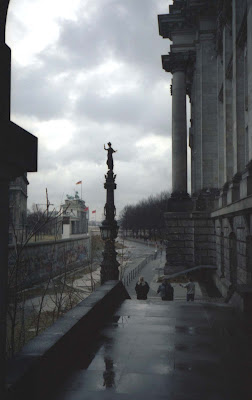 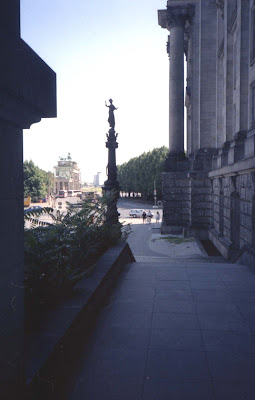 And here we are in February 2012, the government and parliamentary buildings integrated, spruced up, and complemented by shiny new meeting rooms and libraries - and directly across the double line of flagstones marking where the Wall once ran, a sign forbidding access to all but officials with the right sort of ID (to be fair, nowadays you'd only be running the risk of a bureaucratic talking-to rather than a bullet):