What with email, Facebook and such, postal deliveries are a sad disappointment these days. Some bills still come on paper, as do begging letters from estate agents (not quite so frequent at the moment, but where I live is still, as they say, sought-after) and flyers for takeaway pizza and curries from implausible distances away (somehow I doubt there's much measuring of cost-effective performance in their marketing: as the old saying has it, half the advertising budget is a waste of money, but it's impossible to tell which half).

But among the dross this week was a bit of a novelty. I'm not surprised, in the more African-influenced parts of Paris, to have a flyer shoved into my hands advertising the services of some miracle-working marabout (no, not a marabou, that's to do with frou-frou feathers): but not here. Though there are people from Francophone Africa round about here, they stand out by their relative rarity. Perhaps whoever left this particular flyer assumed that everyone who lives within sight of Canary Wharf works in the kind of bank that needs a miracle, or suffers from the kind of magical thinking that believes everything they're told by some chancer waving a shiny derivative.

Howsomever, Mr. Latif has kindly arranged for us all to be informed that

Your entire problem will be fulfilled in SEVEN DAYS. For example: business, financial, career, depression, separated from the person you love, domestic problems regarding husband, wife, children, health, exams, court cases, immigration, studies and sexual impotency or any other problems. Physical sport improvement, to be high rank, to be a winner. JUST ASK?...........Latif's work is 100% guaranteed, breaking black magic and evil spirits in 48 hours.

And in case there's the faintest smidgeon of scepticism left in anybody's mind, he reassures us with the signoff

But here's the thing: somehow his miracle-working hasn't extended as far as getting himself out of Canning Town. 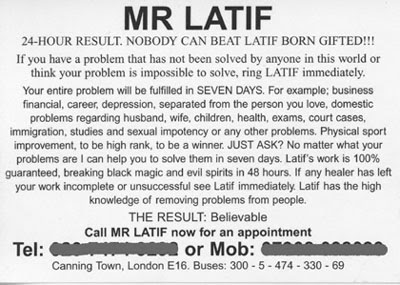