My new trip to work takes me through some places I already know quite well, but also to some complete surprises.

First, I go up the only main road off the Isle of Dogs to Canary Wharf and round the huge roundabout built in under the new developments. This manages to act as a gigantic wind-funnel: a headwind, naturally.

Coming up and out of the roundabout, there's a slightly hairy choice of lanes before ducking out of the main flow of traffic into Narrow Street in Limehouse. 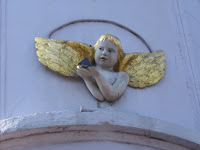 Before the Victorians, this was a base for sailors, often of dubious reputation. Later, warehouses were built along the river; some survive, converted into expensive housing, rubbing shoulders with a converted shop or pub sporting this cherub, model workers' dwellings from a century ago (now gated off and renamed upmarket) and a pub that claims to have been the model for one in Dickens.

A sharp turn comes up to the main road by the Limehouse Tunnel; there's a wait for the roaring flood of traffic to halt a while before you can cross and turn off along Cable Street and its bumpy cycle-path. This runs almost all the way to the Tower of London, past clumps of social history: a short terrace of two-up, two-down cottages, solid blocks of public housing from slum clearance programmes of the 1920s and 1930s (but mostly of course post-Blitz reconstruction), a Catholic church, and one of those pocket palazzos that the Victorians created for public buildings (now a rather neglected looking base for a number of small community organisations, with a convenient side wall for this mural commemorating the anti-Fascist "Battle of Cable Street" in 1936).

Then there's a longer, older terrace of Regency/ early Victorian houses for the middle class, a corner pub which is now a private residence (next to the halal butcher and a few steps from one of Hawksmoor's "coal churches") and on past slabby and brutalist 1960s concrete and system-built tower blocks. One thing I notice more and more is the waste of odd left-over spaces around these estates - a bit of pointless grass, at best, with little sign that anyone ever uses it. But here and there, some have been taken over, officially or otherwise, for little vegetable gardens, many with the kind of trellis pergola for growing squashes that I take to indicate some initiative by Bangladeshi residents.

On down the nondescript Royal Mint Street, with the apparently prettily-named Rosemary Lane restaurant the only reminder that, in the days when that was the street's name, this was one of the poorest and most destitute streets in London. Here Mayhew came across people who lived by collecting and trading in street-waste - bones, cigar-ends and "pure" (dog dung, used in tanneries). 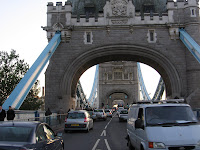 Here the route turns into the main stream of traffic squeezing its way over Tower Bridge; once over, a lot of traffic is lining itself up to turn left at successive traffic lights, and some decisive judgement is needed to get into lane to turn right, down Tanner Street and into Leathermarket Street (do you see a theme here?). Here's another area gentrified apparently and mercifully without (so far) massive rebuilding: the Morocco Store and the Leather Exchange buildings are still in use as offices for small businesses. Crossing Bermondsey Street you see the greasy spoon is still doing business, even as the kind of sports shoe shop that wouldn't look out of place in Covent Garden has opened up (it's called "United Nude" - nope, me neither) and the pubs have spruced up: "ever popular" the estate agents call it (i.e., property prices beyond the imagining of people who knew it 40 years ago). 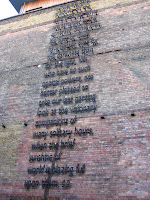 This is Dickens territory. A little to the East was Fagin's lair, a little to the West, the Marshalsea debtors' prison, as featured in Little Dorrit (and David Copperfield, and Dickens's own life). And here, all down the side of a building, is a quotation from "Pickwick Papers".

Over the next main road, you're into Chaucer, as the streets in the Tabard Gardens estate (another 1930s public housing development) are all named with reference to the Canterbury Tales (Pilgrimage, Pardoner, Manciple): the pilgrims would have set out from the Tabard Inn on Borough High Street nearby. With wide quiet streets shaded by full-grown plane trees, it looks closer to the planners' pictures than their 50s or 60s equivalents do today.

Crossing over Great Dover Street (the main road to Canterbury and the coast - you see why the pilgrims set out from Borough), the route comes back into Dickens's time, passing a side street of plain Victorian workshop buildings, and turns into the grand, elegant 1830s Trinity Church Square with a church (now a recording studio) at its centre: 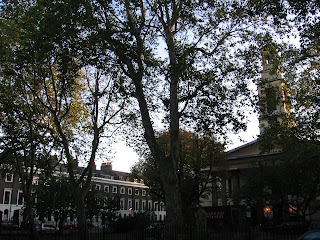 I could imagine Dickens's not quite upper crust settled here: enclosed among their own kind, but close enough to their businesses to keep an eye on their workers. Apparently it's owned by Trinity House, which operates the nation's lighthouses: this might account for the austere and uniform external decoration.

Turning south again, and past the mosque on Dickens Square (now what would he have made of that?), avoiding a dustcart (or is it a work of art?), it's a short run down and round past the Salvation Army headquarters - how appropriate - to the Elephant and Castle: 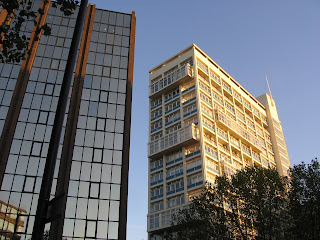 And in the evening, I get to do it all again in reverse.
Posted by Autolycus at 19:25