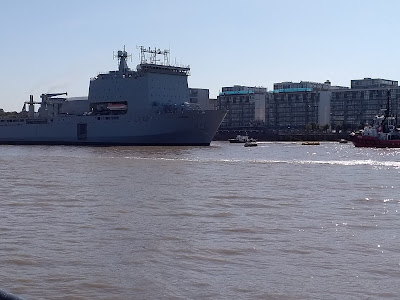 Not what one normally expects to see while out to get the weekly shop. This Royal Fleet Auxiliary was in town for one big event, but on Saturday morning was joined by a couple of patrol boats, one of  which took up position as a lane marker for the Great River Race, the annual 20-odd mile procession race all the way from Greenwich to Richmond. With so many crews from outside London, a lane marker's important, to stop the inexperienced from succumbing to the temptation to cut corners on the inside of the bends: not only is it counter-productive (the current runs fastest slightly to the outside of the middle on a bend), for that reason it's also against the rule of the river, and would risk collision with oncoming traffic.

There might have been another reason for the patrol boats' presence. It's the custom for crews in this race to fly as large a banner as they feel they can (this is no race for high-tech Olympic-style craft stripped down to the minimum). There's a usually a fine display, creating no end of puzzles trying to recognise all sorts of county and local flags that we wouldn't normally see; this year I only saw one with a Skull and Crossbones, but it obviously did no harm to have the Royal Navy on hand. (Apologies in advance for the quality of the video: trying to zoom in across such an expanse of water pushed my phone camera's capabilities to the limit):