So much for this morning's leisurely walk to the DIY shop:

Obituary of the year

My newspaper has marked the passing of an evidently fertile musical legend:

"He is survived by four wives and 42 children, many of them percussionists."
Posted by Autolycus at 09:54 1 comment:

The downside of home exchanges

And that's just for me. Imagine if it were for a family. Heigh-ho.

Posted by Autolycus at 11:50 No comments:

Six hours on a train may sound like a throwback to the days before cheap flights, but on a TGV through southern and central France six hours pass quickly enough. Even if you haven't brought enough to keep you occupied in the way of books and electronic entertainment, there's plenty of scenery to look at, and it's a very comfortable ride: to my mind, far more so than two hours in a plane. You can get up and walk along to the cafeteria car (not exactly a gourmet experience, but still a change of scene); and one advantage most people won't (I hope) have to experience is that if something you've eaten or a touch too much sun and heat have left you, as they did me, in a state of some intestinal uproar, then the double-decker TGVs have two loos per coach and lots of coaches. These things count..... Planes turned out to be slightly on the agenda in Paris, though. I've been through the strikingly Jules Verne-ish Arts et Métiers metro station often enough, but I have no recollection of visiting the museum for which it's named. Although, literally, it means "Arts and Crafts" it's in fact a historical survey of scientific and industrial innovation in France - hence the place of honour for Blériot's cross-channel monoplane, not to mention an earlier bat-inspired, steam-powered plane that, well, didn't manage to cross the Channel.

Plenty of other forms of transport on display, including an array of bikes from different periods, among them a Vélosolex, with a little engine mounted on the front wheel. I remember riding around on one very nearly 50 years ago. Mind you, it was all fields then.

But just to show it wasn't just a relatively old-fashioned set of display cases and ancient relics, they had an interesting temporary exhibition about the impact of technical innovations on the process of design - and what does a designer do in the age of open source software and 3-D printers? All sorts of interesting new products and ideas on display, and more re-imagined bikes - some more practical than others: Posted by Autolycus at 20:31 No comments: And it also has a maritime museum. There are some video animations to tell you the stories of various developments in sea transport, illustrating the models and artefacts on display, and a fair range of different types of boat, but apart from the replica of the admiral's galley from the Battle of Lepanto, and this modern replica of a real nineteenth-century attempt at a submarine (apparently it did work), it's a little underwhelming.
Posted by Autolycus at 09:12 No comments: 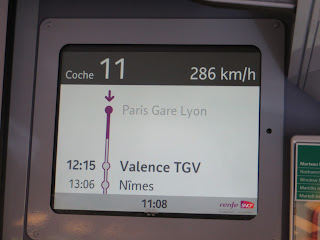 Posted by Autolycus at 11:59 No comments: