A little sunshine makes all the difference Posted by Autolycus at 12:24 No comments: Posted by Autolycus at 11:33 No comments:

Walking up to a tram stop, I noticed a group of people giving an unremarkable stretch of canal more attention than you'd expect at that time on a Saturday morning - and this was why:

Posted by Autolycus at 19:01 No comments:

Mumblety-odd years ago, on my first evening in Amsterdam, I ate at a restaurant offering traditional Dutch cooking. The special of the day rather appealed as much for the sound of the name as much as anything else: hutspot met sudderklapstuk, which turned out to be a mash-up (hotchpotch) of potato and vegetables with a huge piece of braised beef. 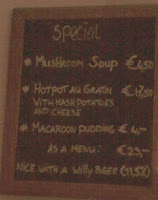 The restaurant is still there, though much more spruced up these days, and still includes such substantial fare on the menu (and in these temperatures, you can see the benefit).

However, the specials this time didn't particularly appeal (and what sort of beer were they offering?), so I chose a variation with curly kale, and a sausage and speck (bacon pieces). 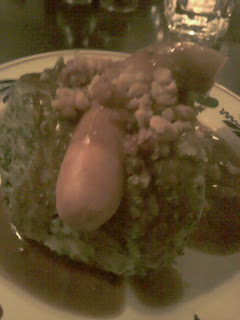 The presentation was a bit...well, striking.

And then the demon of literal word-for-word translation struck on the dessert menu. Even with a cinnamon and caramel sauce, "bag cheese on a biscuit" doesn't entice.


P.S. I've just noticed Disqus's bizarre idea of "related" content elsewhere among their users - nothing to do with me. I'm working on finding an alternative commenting widget if anyone has any bright ideas
Posted by Autolycus at 08:00 2 comments: Greetings from a very cold and snowy Amsterdam, where (as you can see) if you want to tempt customers in by tempting other customers to sit outside, you might as well try offering them blankets, in fetchingly contrasting colours.

Feeling like a break, I've given the traditional rail and ferry option a try. They can zhoosh up the ferry as much as you like (comfy bed, own telly and ensuite bathroom well up to medium hotel standard), but I doubt if I'll ever be able to sleep properly on any sort of moving transport (not that the movement made itself felt on this trip, with much less juddering and jolting than I get on the bus of a morning). And the rail connections are still somewhat unwelcoming and inescapably tedious, with seasonal problems adding to the commuter crush. Arriving in the murk of a winter twilight, the view is all shades of grey across the snow, apart from the lights of cars and the occasional advertising sign; and when the sun finally breaks through, the few distinctive objects on the landscape barely make a mark through the mist.

But Amsterdam retains its distinctive mixture. Amid the bikes and gables and down a side alley, the eye is drawn past today's graffiti art to the 16th century outline of the Begijnhof, more peaceful than ever in the untouristed snow. Posted by Autolycus at 14:35 No comments: Round on the city farm, the ornamental fowl may not have been too sure about venturing out, but some animals come ready-wrapped for the weather. I have some creative neighbours: 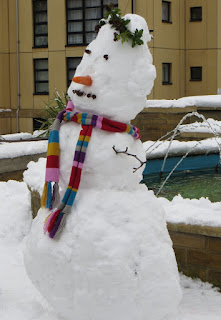 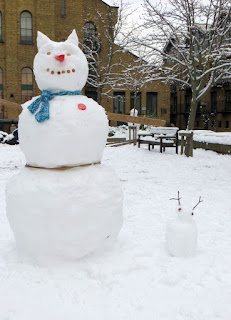 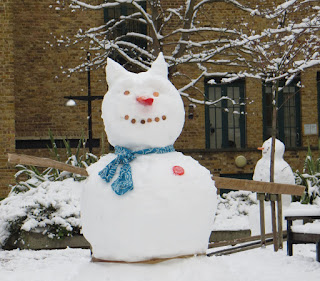 Posted by Autolycus at 11:31 No comments: