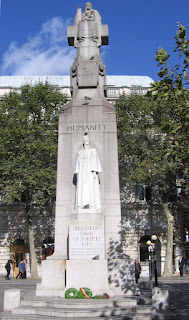 It was entirely a matter of chance that I walked up Charing Cross Road today and noticed the coincidence of the date on the memorial to Edith Cavell that, like millions, I've passed countless times before. Today is the anniversary of her execution by the occupying forces in Brussels; evidently, wreaths had been laid this morning, one with the Belgian colours on.

What is remarkable about her story is not just that the shock of it brought home that the war, then still relatively new, was going to be more brutal, for women as for men, than many had so blithely supposed it might: it was her final words to those around her that made such a deep impression. She might perhaps have meant them more as a clear-sighted acknowledgement that she had always understood the risk she was running, than as the pacifist and humanitarian message they came to signify. But that was what continued to resonate long afterwards: 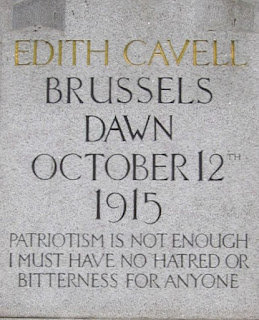